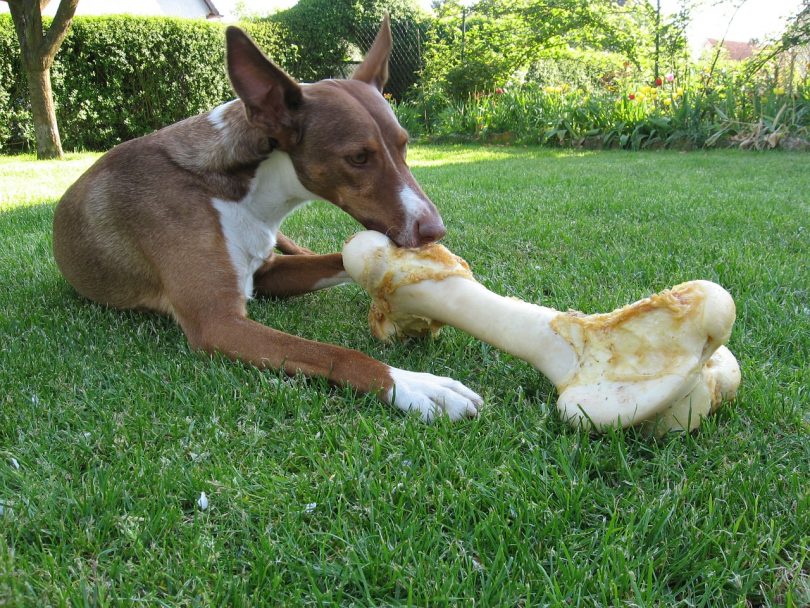 We all love a treat now and then, don’t we? Not to mention our tail chasing friends, the dogs. And what’s the all time favorite treat every dog in the world prefers before anything else? Right. Bones. But have you ever wondered why do dogs like bones so much? We have, so read on to find out our conclusion.

One thing you might have noticed if you’re a happy – or not – dog owner, is that they love to chew on stuff. And by stuff we mean everything. From bones to shoes and furniture or any other object lying around in your house, dogs won’t miss any opportunity to gnaw on something. And no, they don’t care that you just bought those lovely shiny shoes.

So there must be something about their natural instinct to chew. But what is it?

Research on the subject shows that chewing is for dogs a way of inspecting their environment, of finding out more information from their surroundings. Chewing is a natural instinct for dogs and has some health benefits, such as removing tartar from their teeth or alleviating boredom and loneliness.

Dogs And Their Ancestors

Scientists have discovered that today’s dogs are the descendants of modern wolves which in their turn are descendants of some ancient canines who evolved to hunt in packs. That was happening around 8 million years ago. Those ancestors were actually hypercarnivores – animals that eat more than 70% meat.

Evolution then led to modifications of their skulls so they grew stronger jaws, jaw muscles and larger teeth to be well adapted to their new hunting habits.

As we know, nature selects the fittest individual to survive and pass on his genes, which is exactly what happened to those ancient canines. The ones who survived were the ones who had the larger teeth and stronger jaws and that natural instinct to gnaw on their prey, bones included.

So our modern lovely tail chasing friends have that natural instinct even if they eat only fine canine canned food and look like the cutest and most inoffensive ball of fur. They seem to have evolutionary reasons to gnaw on bones when given the chance.

Bones: A Cure For Dog Boredom

Besides the nutrients that bone marrow contains, plus calcium and other vitamins and minerals, bones help with boredom as well. Since gnawing a bone is a natural instinct for dogs, the activity seems to calm them and alleviate boredom and loneliness, which in the end makes them happier. Since in their evolutionary past, hunting happened in packs, gnawing at a bone when they feel alone might give them that good feeling that they’re part of a pack.