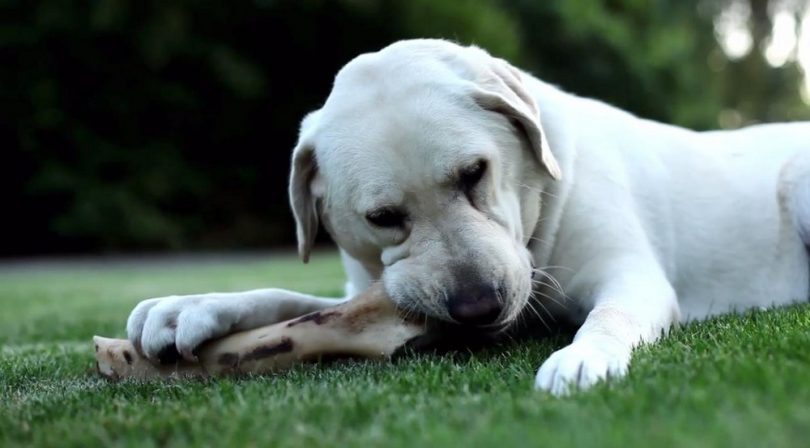 Dogs love chewing on bones but some of them can also do a lot of harm to them and it might be difficult to realize when that is the case. If the dogs are larger you might think that there isn’t any risk so roast or ham ones are usually a preferred choice. Can dog eat a ham bone though is a question that has many ramifications most of us don’t know about so let’s explore the subject in depth.

The bones that come from any animal, no matter the size, can be really dangerous to your pet and are considered unsafe by veterinarians. The FDA warns about all the damage they can do and you need to make sure you know what you give your pet since these can even lead to death.

The cooking process makes the bones more brittle and thus they have a higher chance to splinter, causing internal damage to the dogs. To add to this, any benefic nutritional value that bones had might be removed through cooking.

The most common problems that can be caused by cooked bones are broken teeth, mouth or tongue injuries, and the bone getting looped around the lower jaw or even get inside the esophagus and become stuck there.

The windpipe is another place where the bones can get stuck (hard to believe it, but there are many cases of this) and further down in the stomach there might be bones that cannot pass out into the intestines leading to the need for surgery or at least an upper gastrointestinal endoscopy.

The bone fragments can be really sharp and they might injure the intestines or rectum as they move along. One of the components of bones is calcium and this has the tendency to make the stool firmer so constipation can be expected and if some of the sharp bones puncture the stomach or intestines then peritonitis is what you are experiencing which can be deadly and requires urgent surgery.

With such a long list of possible problems you should now realize why this is a very serious matter and why you shouldn’t ever feed your dog cooked bones, so then the next question comes naturally whether or not things are different when it comes to raw bones.

Are Raw Bones Safe for Dogs?

Raw bones are the ones that dogs have been eating since they first started as scavengers and they can be quite healthy for your dog. Gnawing is good for exercising with your dog for the jaw and that is why dogs love it, plus they seem to really enjoy the taste.

Canines ate raw meat and bones throughout their history and there are some nutrients that the puppy needs which can be found in the bone marrow as well as in the bones themselves so these are really healthy for them.

Now the way you set eatable bones from the ones that you shouldn’t feed your dog is to think about animals that he could catch such as birds or even beef. The most nutritious are chickens and turkey since the provide calcium, phosphorus and other minerals and due to their soft and pliable nature they can be easily crushed.

Large bones of beef aren’t as nutritious but your dog will be entertained for a long time trying to properly gnaw on them and this is a mental as well as an oral stimulation for your pet. Now think of these large bones as a recreational treat and don’t leave your dog unsupervised with them.

If you have more than one dog, keep them separate before feeding the bones since they become really territorial about them and might fight one another. If the dog has some restorative dental work, don’t give them bones because they might ruin the work done and also give this habit up if you have a dog that is predisposed to pancreatitis. In the latter case you can opt for low fat versions of bones that you can make by thawing one and scooping the marrow out.

These are quite an exception to everything we discussed before because the raw pork bone can be contaminated with trichinosis so it is a really bad idea to give one to your pet. Another thing about them is that even raw they can splinter in the same way cooked chicken or beef bones do, so never feed them raw to a dog.

The pork bones can be fed to your dog if you freeze them for at least two weeks because this will get rid of any flukes or young worms that might have been living there and an even better idea is to put these in a pressure cooker because then they become really soft and can be eaten without any fears or worries.