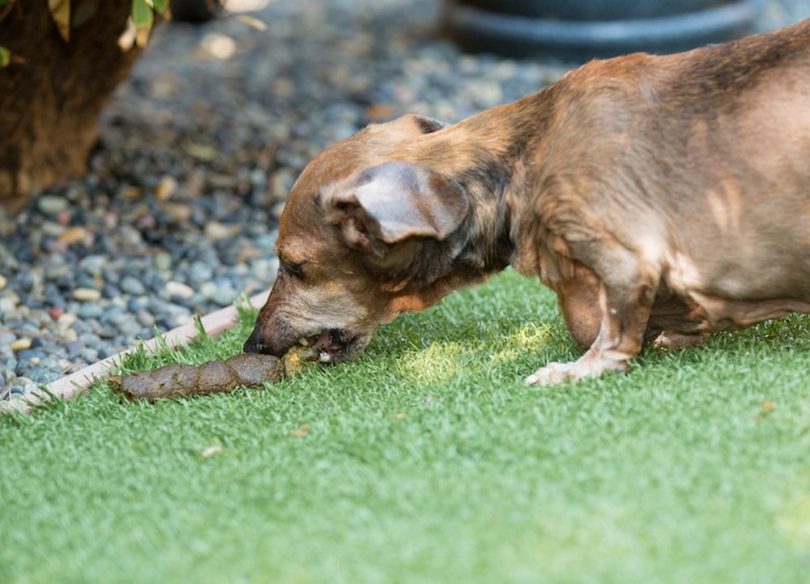 If you have had a dog for a bit you will probably notice several strange behaviors and among them is coprophagis, an act that might make you ask yourself “why does my dog eat poo? ” The first thing you need to know is that this is quite a normal behavior for dogs and that it can be stopped, but let us find out why they do this.

During most of their history as a species dogs lived off anything they could find and among these things the waste of other animals or other dogs were included. Thus the first explanation for this behavior is that it is a remnant of the dog’s history and puppies eat it as an instinctive behavior.

Continuing the idea of dogs scavenging in the wild, a mother with pups will try to keep her den as clean as possible so that there isn’t any scent to attract predators. One of the ways to do this is by consuming the poop of her pups.

Even in household environments there is a set subordination of the roles of each dog and there is a tendency for the submissive ones to eat the waste of the dominant ones but it isn’t clear why this is the case.

If you have several dogs and one of them gets sick you might notice that the healthy ones will try to eat the feces of the unhealthy dog and this behavior is explained in the same way as the mother and her puppies. It’s a defense mechanism to keep predators away.

How This Affects the Health

You are probably thinking that all those toxins ingested back into the pet’s system will do quite a lot of harm, but there are moments when you see dogs even preferring poop to their usual dog food. The enzymes in the poop might allow the dog to better digest their food and it also gives them vitamin B.

Some evidence shows that the high levels of dexycholic acid in the feces improves the neurological development of puppies and if you see this then the diet you offer your pet might not be the best one possible, so consult the vet to solve the problem and the coprophagis should stop as well.

Taking the Dog to the Vet

Is this something that is required if we said that the behavior is normal? The answer depends on the cause of their poop eating and if they aren’t getting some of the nutrients from their regular diet this might mean that they have some parasites or pancreas problems such as exocrine pancreatic insufficiency (EPI) or pancreatitis.

The EPI is caused by the loss of cells due to something called the pancreatic acinar atrophy and this can have genetic causes in breeds like the German shepherd. The problem with the disease is that only when the pancreas reduces its enzyme production almost entirely do symptoms start being seen, so take this sign to check with your vet especially if you have a German shepherd.

Pancreatitis is most prevalent in middle aged dogs of all breeds but Yorkshire Terriers and Schnauzers are the most commonly affected and this disease is caused by infections, metabolic disorders, obesity or even some medication.

Other problems that might lead to this behavior include intestinal infections and different malabsorptive syndromes that can appear due to an allergy to proteins in the cereal grains and these can lead to the abnormal lymph drainage of the intestine. In this case you could switch to grain free dog food.

Teaching Your Dog to Give This Up

If your dog doesn’t have any medical problems and his diet was approved by your vet then this might simply be a sign of boredom or his primal instincts acting up and this behavior can be stopped if you pay a bit more attention to the dog’s needs.

The important thing to remember is that it’s always better to use positive reinforcement when wanting to teach the pet something new and in this case this is even more relevant because punishing the dog will make him think that the poop is what you are scolding him for and thus he will try to hide it – by eating it.

If boredom is the problem, then regular exercise, new toys, more games and additional affection should disrupt the activity. If you clean up after your dog and he notices this he might misunderstand your intent and will try to do the same by cleaning his own mess.

Puppies are really attentive to what happens around them and if they see an older dog doing this they might copy that behavior. Each new thing is learned by licking, tasting or smelling for puppies but most of them will grow do dislike poop quite quickly, so don’t start panicking too soon if you have a young pup.