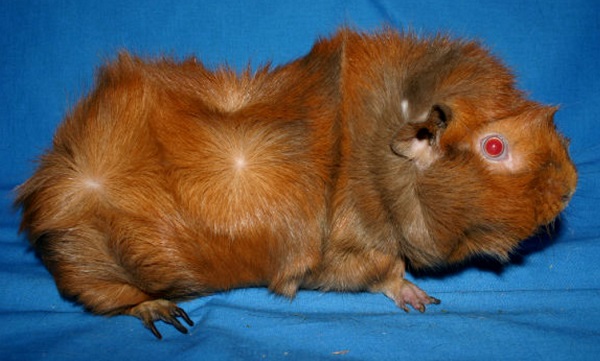 Exotic-sounding breed names help lead to more sales and better marketing for the guinea pigs. This particular type of guinea pig, the Abyssinian was marketed originally as coming from the Abyssinia region of Africa on ships that were apart of the guinea slave trade.

This is all speculation but these guinea pigs were thought to be exotic and their owners wanted to give them a name that reflected that so sales would be higher, and marketing them to the public would be easier. 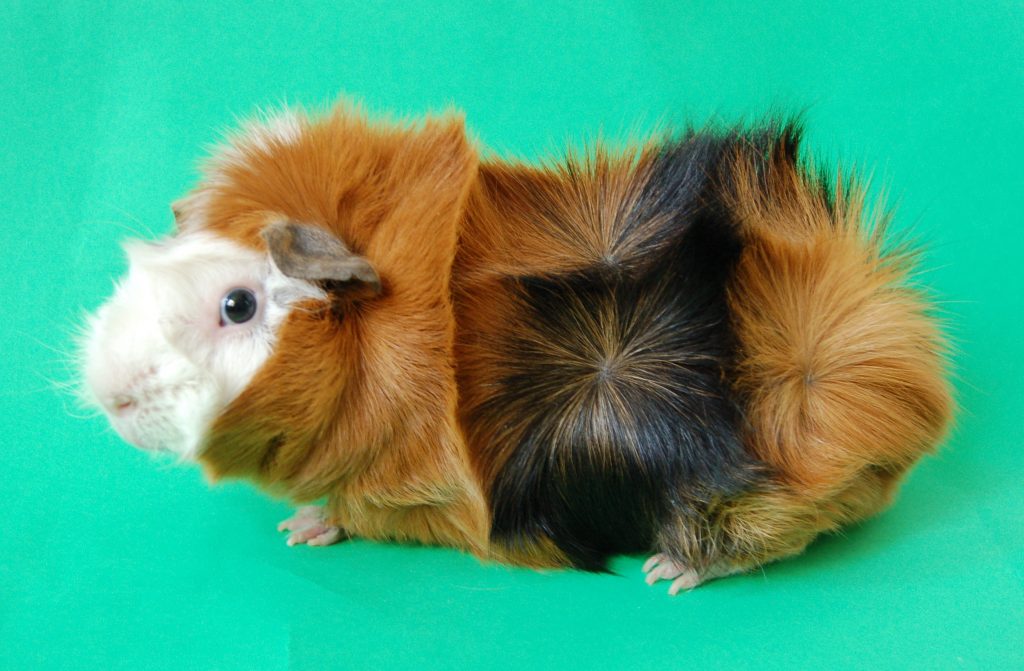 Abyssinian guinea pigs are known for their rosettes, which are hairs that radiate in a circle from the center point. On average, these guinea pigs have about eight to ten rosettes on their bodies and heads.

In addition, these rosettes can also be located on the shoulder, on the hip, and on the behind. There are different types of patterns of colors for these rosettes on the Abyssinians. The most notables ones are called agouti, brindle, dalmatian, dutch, and tortoiseshell.

The colors can range from black and white to brown and red for their rosettes. Similar to the regular Abyssinian guinea pigs, some of them have a satin coat, which has an added sheen or gloss look to it.

The pregnancy or gestation period for the female Abyssinian guinea pigs will last about a period of two months from 60 – 75 days.

There are a lot of complications with the female sows giving birth so there is a high mortality rate for these new mothers. It is estimated that about 20% of all female Abyssinian guinea pigs will die from giving birth during pregnancy.

The older the mother is during the time of pregnancy, the harder it will be for her to give birth successfully.

This is especially true if the female is older than eight months at the time of pregnancy. The litter size for new Abyssinian guinea pigs can be between one to six babies total, with three being the average.

Unlike most mammals, the baby Abyssinians don’t need that much special care and treatment after they are born. Usually, they have their eyes open, their teeth are fully grown, and it is only a short time before they can walk and run all over their cage. It only takes them about a few days or up to a week after birth to eat solid foods and drink liquids. They only need three weeks of being cared for by their mother before they become independent and start to enter the adult phase of their lives as guinea pigs.

The average lifespan of an Abyssinian guinea pig is very similar to other breeds of guinea pigs. They live about five to seven years total.

How long the Abyssinian guinea pig lives depend on a lot of outside factors. These factors include its immediate environment, diet and food intake, genetic makeup, etc. Sometimes, a guinea pig can live only to five years while others can live up to fifteen years.

The most important aspect of an Abyssinian guinea pig’s health is its’ intake of daily vitamins like Vitamin C. If they don’t have enough of it in their daily diet, the Abyssinian will run the risk of contracting scurvy or other diseases.

A study in 2010 conducted by David Williams and Ann Sullivan had concluded that the Abyssinian guinea pigs were at higher risk for eye problems than other breeds of guinea pigs.

Specifically, they have a much larger risk of having microphthalmos (small eyes), which can lead to blindness and cataracts. In addition to contracting an eye disease, Abyssinian guinea pigs have a higher genetic predisposition to developing diabetes and ovarian cysts for the females.

Personality of the Abyssinian

Abyssinian guinea pigs are known for being very rambunctious, energetic, and more spirited than other breeds. However, they are not malicious and will not try to bite humans. Abyssinians also are very vocal with their sounds and are very social. They do not like to be cuddled or coddled but are independent and self-reliant for the most part.

Like other breeds of Abyssinian guinea pigs, they tend to be fairly intelligent.

In particular, they are good at an associative type of learning where they know to associate one occurrence with another. By setting up a water tank to drink from in their cage, they know to go over to it and drink from the opening. While the Abyssinian guinea pigs are not good at abstract forms of learning, they are good at solving spatial and navigational problems with their intelligence.

Most owners would consider their Abyssinian guinea pigs to use terms such as ‘energetic, independent, lively, and loving’ to describe their pets.

If you’re looking for a pet that’s fun, playful, and independent, the Abyssinian guinea pig may be perfect for you and your family. With unique physical characteristics and a life span that has longevity, the Abyssinian is a strong and healthy breed of guinea pig that any pet owner would appreciate and enjoy.