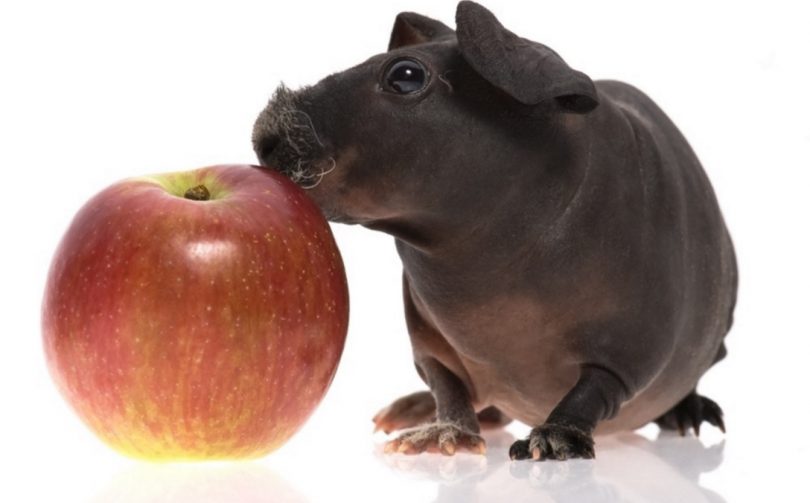 The ‘skinny pig’, also called a hairless guinea pig, is known for being an unique type of guinea pig, because it is not very widely available and has its’ own distinctive features. Many people don’t even know that the skinny pig is its own breed of guinea pig in the first place. However, over the past couple of years, the hairless guinea pig has become much more of a household pet popular with families and homeowners alike. Easy to domesticate as a pet, and small enough to feed and give water to, the skinny pig has been gaining in popularity in pet stores all across America. 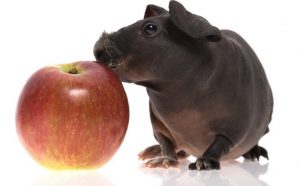 Besides being hairless on most parts of its’ body, the skinny pig still has hair but only on its feet, legs, and all over its’ nose. In addition, they can also hair on their backs but that is less common. Many believe that the skinny pig is actually a shaved guinea pig rather than its’ own unique breed. Skinny pigs are also known for having really smooth and gentle skin. It’s easy to rub their backs and their stomachs without causing them any discomfort.

They’ll have some wrinkles and flaps in their skin located close to their necks and legs. Contrary to popular belief, despite their skinniness, the skinny pig does not have protruding or visible bones, ribs, or spines. If that is actually the case, then your skinny pig is unhealthy due to being underweight or malnourished. If you feed your guinea pig properly according to their regular diet, they should have a normal appearance.

Like most guinea pig breeds, the skinny has an assortment of options when it comes to their regular diet. The most common food for the it to eat is known as ‘Timothy Hay.’ While popular as a form of bedding for the guinea pig, you should make sure to buy the timothy hay that is edible for food purposes. Your skinny may want to play in the hay, which is fine as well. In this case, it would be perfectly normal for the guinea pig to play with its’ food as long as the hay you buy is consumable.

The skinny diet should include some fruits and vegetables such as apples, celery, spinach, blueberries, etc. As the owner of a skinny pig, you have to make sure that there’s a balance between the timothy hay that you feed your pet, and the fruits and vegetables that you serve. Too many fruits or vegetables and not enough hay will cause diarrhea and indigestion in the guinea pig. Lastly, food pellets are also a good item for the skinny to eat because they are a good source of vitamins and nutrients. Do not give your skinny pigs any of the following foods: chocolate, meat, corn, potatoes, and dairy products. Any of these items would be really bad for the health of your skinny pig so its’ best to avoid purchasing them for your pet.

Origins of the Skinny Pig

The skinny pig is one of the youngest or newest breeds of guinea pigs out there. They have only be known for about forty years or so. Instead of being discovered on an island or in a field or grassland, the skinny pig originated in the laboratory. Scientists created the breed of skinny pig by mixing a hairless lab strain of DNA with that of a haired guinea pig. By implementing this genetic mutation of DNA strain into a haired guinea pig, the skinny pig breed was first created. The Institute Armand Frappier of Montral, Quebec first developed the new breed of skinny pigs at its’ facilities in 1978.

During this time, scientists used guinea pigs as test subjects in various experiments. The creation of the skinny pig breed was mainly done for research purposes. In 1982, Charles River Laboratories used a new batch of skinny pigs that were bred for experimentation in dermatology studies. Similar to humans, the skinny pig is a mammal with a normal immune system and a thymus. Because of these physical characteristics, the skinny pig is known to be a good test subject.

Caring for the Skinny Pig

Because they don’t have this layer of protection and warmth, the owners of the skinny pig must be more attentive and cautious if they have a this pig for a pet. Skinny pigs are more sensitive to higher and lower temperatures so its’ important to house them at a normal room temperature. Giving them more food each day and placing them in a room at a mild temperature will allow the skinny pigs to maintain their 75 – 80 degree (Fahrenheit) body temperature. Also, because of the lack of hair, skinny pigs are more vulnerable to injuries, infections, and lacerations of the skin. It’s best to keep your skinny inside in a controlled environment most of the time. If you let them roam free outside for a little while, make sure you watch your guinea pigs and make sure you watch them carefully while they enjoy the outdoors.

Skinny pigs are fun, lovable, and energetic animals that enjoy the company of people. If you’re an owner of a skinny pig, make sure you care for them and feed them well. In return, they make for great pets that will be adored by you and your whole family.