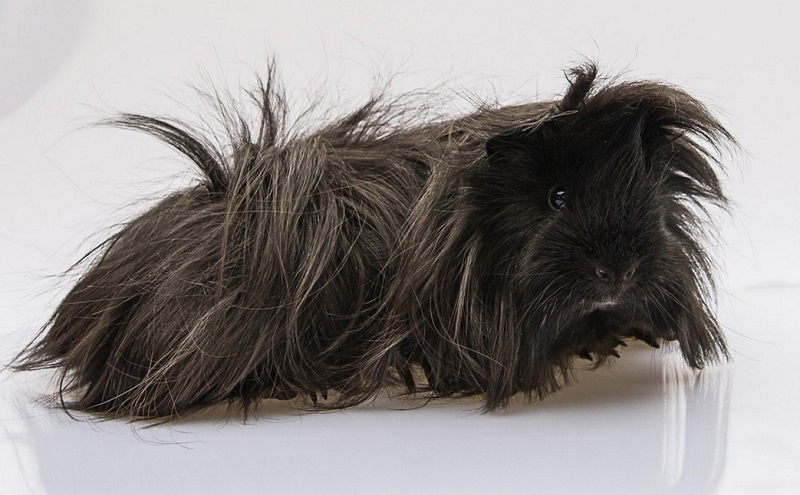 The guinea pig is a popular pet throughout the western world.  They are part of the rodent family, and often known as ‘cavy’ (due to their Latin name Cavia Porcellus), but interestingly enough, they are neither pigs, nor have any relation to Guinea!   There are many breeds, and interbreeding has created more diversity, but here are the main long haired guinea pig breeds. 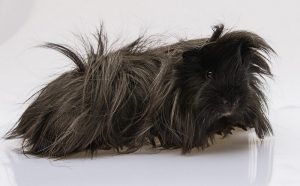 The longest haired guinea pig is the Peruvian guinea pig.  It is recognizable by the surprisingly long hair (it is a Peruvian guinea pig which holds the record for the longest documented hair length, and they can regularly grow hair to 20 inches – that is over 50 centimeters – long. Unlike many other breeds, the hair is straight, as opposed to curly, and grows in a relatively uniform fashion.

The hair tends to form a natural parting (think of the classic 90’s haircuts for young men, hair with a center parting style, staring at their Doc Martin boots listening to music…) along their back, and the hair will also grow forward over the face.

Looking after a Peruvian guinea pig requires a lot of effort and attention.  The unusually long hair can become knotted and cause discomfort to the animal.  To avoid this, regular gentle combing is required. To make maintenance easier, some people choose to trim the hair, which while certainly makes the animal a little easier to care for, it does take away some of the specific charm of the animal.

Behaviorally, the Peruvian guinea pig is known to be slightly more aware than other breeds.  Expect a very nosey animal, always interested to explore every nook and cranny of their living space.  They are alert and in tune with their surroundings so expect a bigger and more pronounced greeting when returning to spend time with your furry friend. 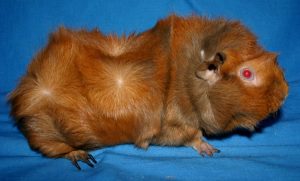 The swirls are a result of rosettes.  (These are very similar to ‘crowns’ found on a human head with hair mostly sprouting in a circular form from one point).   While a human head generally has one crown, or occasionally two crowns, Abyssinian guinea pigs will have many more, (usually 8, sometimes 10) causing a slight ‘tufting effect’ as hairs emanating from different rosettes clash and get pushed upwards by each other rather than sitting flat on the animal’s body.  The rosettes are usually arranged by pair, creating a neat pattern across the body.

They can come in a wide range of colors, often at the same time!  Sometimes up to five different colors can be identified in the fur of just one of these funky piggies.  Again, the longer hair requires greater attention and maintenance.  Regular grooming, combing and washing means this is not a pet for those looking for a minimal commitment.

The Abyssinian guinea pig is regarded as the joker of the pack.  Fun, playful and occasionally mischievous, they may make a bigger mess than their counterpart breeds, but that is balanced by their loving personality. 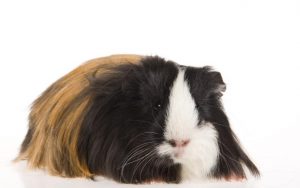 Silkie guinea pigs, sometimes known as ‘sheltie’ are also known for their distinctive long hair.  Unlike the Abyssinian guinea pigs, the hair is straight, but they are also unlike the Peruvian guinea pigs as the straight hair grows straight back from the crown, (think Gordon Gecko/ Michael Douglas in Wall Street) or create a super cool, slicked back look.

They also tend to grow longer hair at the back and instead of parting down the middle, tends to form a more distinguishable pear shape.

The hair is especially smooth and silky which makes them great fun to play with, the shiny coat is a real winner, but they also require a lot of attention.  The long luxurious hair will quickly become tatted and untidy without regular brushing and grooming. 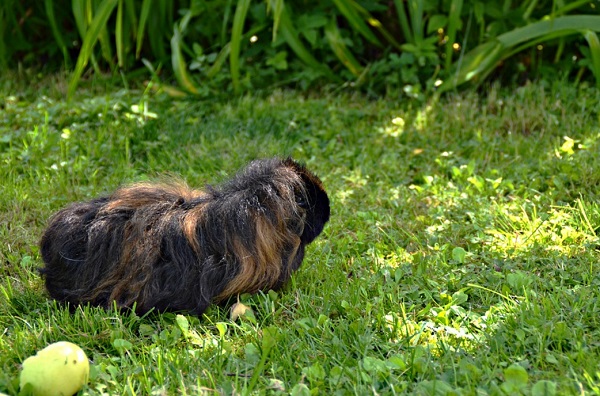 The Alpaca (also known sometimes as Merino Peruvian) is very similar to the Peruvian guinea pig , but with slightly curlier hair, which will also grow forward and over the head of the guinea pig.  These are a very popular breed and considered by many guinea pig enthusiasts to be the most beautiful of all the breeds.   They are one of the rarer breeds available and require constant attention to keep the coat fluffy and healthy.  They should not however be bathed too regularly as this can lead to dry skin. 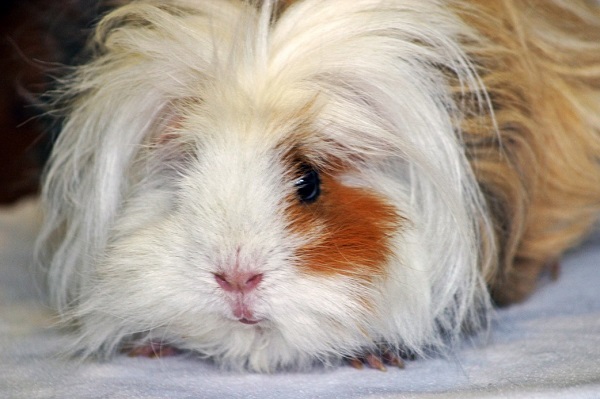 This is a cross breed formed from the combination of a Rex and a Peruvian guinea pig.  They were first bread in Scandinavia in the 19080’s and still remain popular there (the name comes from the Swedish man who first created the breed, Lundqvist).  The long hair creates a wavy striking effect, again parting down the center of the guinea pigs back.  The hair tends to be less silky soft than other breeds, having a rougher texture and when the hair gets longer it can become very dense. 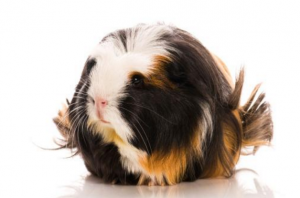 The coronet guinea pig has long hair that tends to grow back from the head like the Silkie breed, but what makes it different is that it also has a crest.  A crest is a rosette found on the very top of the head, in a completely symmetrical fashion, generally in a different color to that of the rest of the body.  This rosette on the top of the skull creates a slight resemblance to a crown. 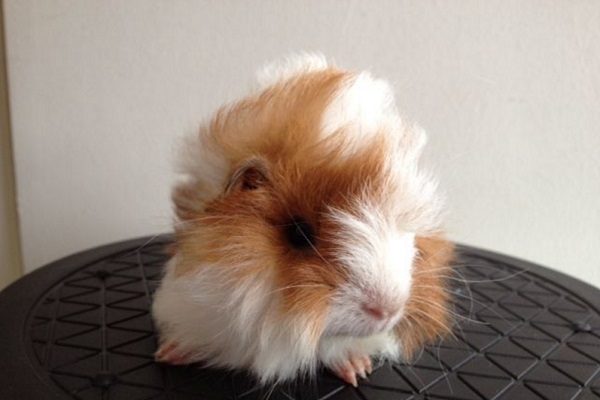 A hard one to miss!  The sheba mini yak is probably most distinctive from its long mutton chop-like whiskers.  They have long hair and many rosettes creating a slightly ‘shaggy’ look. 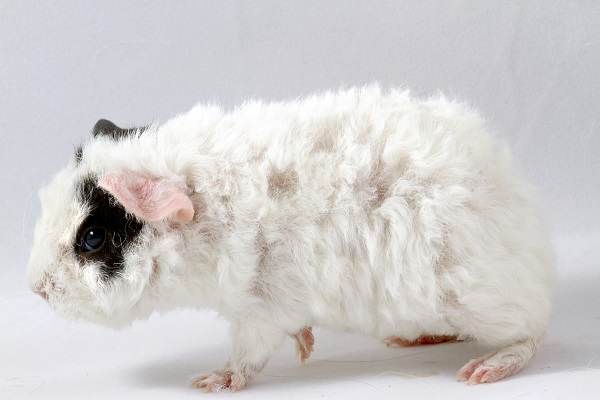 Very similar to a coronet guinea pig, but slightly wavier hair and the rosette is located further back on the head, between the ears, rather than on top. 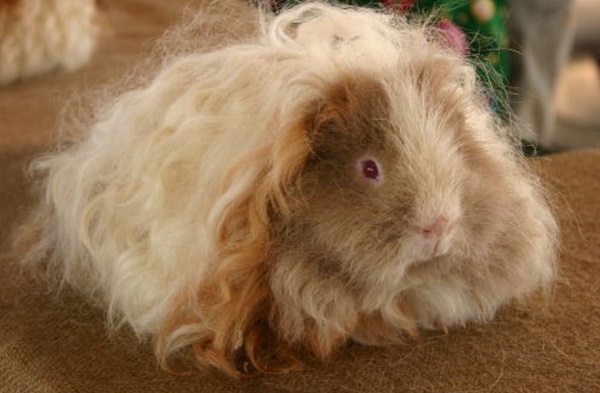 A texel guinea pig is very similar to the sheltie, but the hair has much tighter curls which generally hide the entirety of the guinea pigs body.

There are a number of different types of guinea pigs, all varying in size, hair length, shape and coloring.  Even within the long haired breeds, there are differences, meaning there will be the perfect breed for everyone.  Behaviors are generally the same with some slight nuance, the Peruvian being especially curious and the Abyssinian being slightly more fun loving.

All the long haired guinea pigs make fantastic furry friends.  They may require more attention and grooming than their shorter haired cousins, which means sometimes they are not necessarily the best option for younger children, but remember the more you put in, the more you get out!