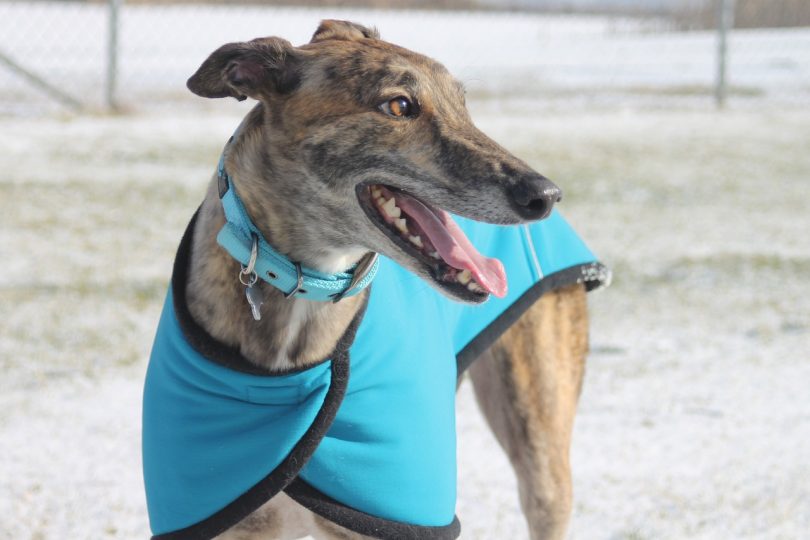 If you ask dog owners about their beloved tail chasing friends, most of them will tell you that their dogs love to run. Some, for several days in a row. Well, that’s what dogs are for, right? The answer will vary depending on the breed, but some dogs really are destined to race. One of them is the Greyhound, also known as the fastest dog in the world.

While this dog breed is mostly known for their racing background, they’ve got other qualities as well, qualities that make them perfect even for family life. Children included. Read on to find out more about the fastest dog in the world.

Greyhounds have narrow sleek bodies and long legs, characteristics which make them perfectly fit for racing. They weigh up to 80 pounds and have a life expectancy of 10 to 13 years.

They have a soft and short coat which can vary a lot in color, including black, brown, red, fawn, blue, white and shades and combinations of those colors.

With his streamlined body, this dog was born to run. They can reach speeds of up to 45 miles per hour, which makes the greyhound the fastest dog in the world. But that’s not their only quality, as they make perfect dogs for families with children.

The greyhound is an intelligent and very affectionate dog breed, with low aggressiveness. They are highly friendly and playful and they make good companions for children, so many people prefer them for these very reasons. They also react well to strangers.

This breed’s history goes back all the way to ancient times. Evidence pinpoints the roots of this dog breed somewhere in the Middle East about 8000 years ago. Apparently they were first used by the Egyptians, Greeks and Romans before they spread around the entire world.

The breed got to Europe at some point during the 9th century, and afterwards was spread to the Americas in the 1500’s by the Spanish explorers.

In the beginning the greyhound was used as a hunting and coursing dog and only later, closer to the modern times, it became a race dog.

Concerning care, the greyhounds only need little grooming as they shed at a low to medium rate, so they present an advantage over other, more popular, dog breeds. They also need only occasional bathing, so you shouldn’t worry too much about this aspect.

When it comes to exercise, they love to run, though they aren’t hyperactive or too energetic. With moderate daily exercise, they can also live in an apartment. One thing to be careful of is their instincts. Since their natural instinct is to hunt small animals, be careful not to leave him off-leash.

Most of them are used with the race life, so it will take a few weeks to adjust to a new type of life, but if you provide them proper training and the time needed for that transition, everything will be ok. Most greyhounds respond well to training.

Greyhounds are intelligent and sensitive dogs, so a peaceful household and kind care will make them perfect companions.