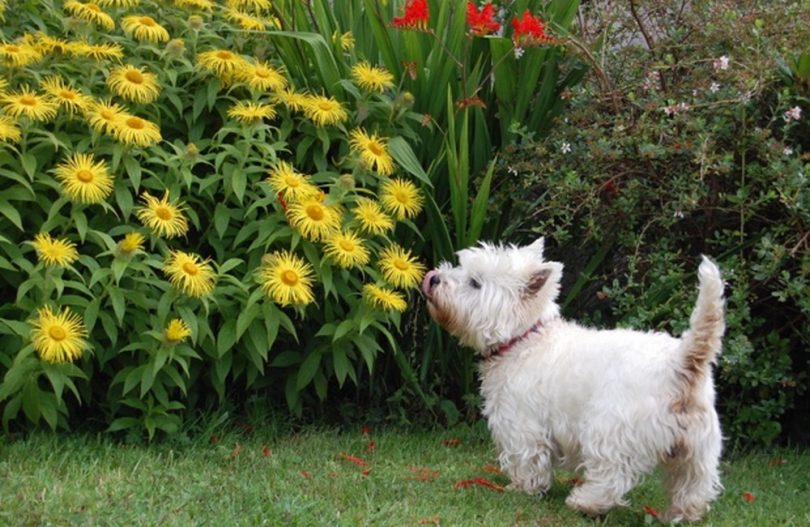 If you have a garden it’s only natural to allow your pets to roam through it as this provides their needed exercise and it also relaxes them, but there is always a threat when they explore things. Dogs are curious and want to try new things, sometimes by tasting them, so here is a list of plants that are poisonous to dogs and to other pets as well.

There are over 700 plants identified to have toxic or psychologically active effects on your pets and they vary in their threat, but we chose some of the most frequent ones for our list and some that you might think are actually benefic. For the complete list check the ASPCA site.

This plant is considered medicinal since it has many health benefits for us, but cats and dogs get intoxicated by it and can start vomiting, get tremors, diarrhea, anorexia and even depression so make sure you keep it out of the pet’s reach.

This is very commonly used as an ornamental plant for gardens and the potted bulbs are a frequent gift but cats and dogs will be poisoned by it. Most of the toxins are located in the bulb and if your dog ingests some the symptoms are similar to the ones above.

Also called Rhodedendron, this is really frequent and is dangerous to most animals. By ingesting just a few leaves your pet can get seriously sick and there is a chance that they might even die from this plant so pay extra attention and if you have any around never leave your pet around it unsupervised.

Toxic to dogs and cats, the tubers are the part where most of the toxins are found and it can cause oral irritation, intense burning, excessive drooling, vomiting and difficulties in swallowing.

Even if there aren’t many who would put this in their garden it is frequently used through public parks and spaces so if you take your dog in one and notice them be extra careful. The symptoms caused by this plant can prove deadly and among the common signs are abdominal pain, drooling, vomiting, diarrhea, excessive thirst, tremors, muscle twitching and seizures.

These are found it pots or through gardens and the root is highly toxic to dogs and cats, leading to gastrointestinal irritation, vomiting and there are even reported deaths.

These are frequently found during spring and their bulbs are highly toxic to dogs and cats. The flowers can be harmful too and the symptoms you will encounter are vomiting, diarrhea, convulsions, low blood pressure and tremors.

This grows in many places and most types of ivy are toxic to dogs or cats, causing vomiting, abdominal pains, diarrhea and excessive drooling.

This is toxic to cats and dogs and it actually very dangerous because aside from the common vomiting, depression and diarrhea it can also lead to seizures, difficulty in breathing, kidney and liver failure, coma and even death.

This is a drug that will give your dog or cat hallucinations, making them upset and agitated and it also disorients them, upsets their digestive system and leads to anorexia and ataxia.

Cats, dogs and horses are affected by all the parts of it since it contains glycoside and can lead to colic, sweating, lack of coordination, difficulties in breathing, muscle tremors, diarrhea and even cardiac failure that can end with death.

This plant is very common in apartments and if a dog or cat nabs on it they might get adverse reactions like an irritation of the mouth, intense burning sensations for the tongue and lips, excessive drooling, difficulties in swallowing and vomiting.

This is only found in warm areas but there it is quite common and for some reason animals tend to be attracted by them. The problem is that all parts are really toxic and they can cause vomiting, icterus, hemorrhagic gastroenteritis, bruising, coagulopathy, liver problems and even death.

These plants might be delicious for us but they cause a lot of discomfort to dogs and cats, leading to excessive salivation, diarrhea, severe gastrointestinal problems, confusion, dilated pupils and a slow heart rate. With this in mind be careful when going on a farm and if you start picking tomatoes don’t bring your pet along.

The bulbs of this flower can be really harmful to dogs since they contain a lot of toxins and if you have a dog that likes to dig a lot then you should put some fence around them. The ingestion of tulip bulbs can lead to severe intestinal irritation, drooling, depression, convulsions and cardiac abnormalities.

The bark or the leaves can be dangerous to animals and even if horses are the most endangered by it, dogs can also get harmed and experience trembling, incoordination or difficulty breathing.