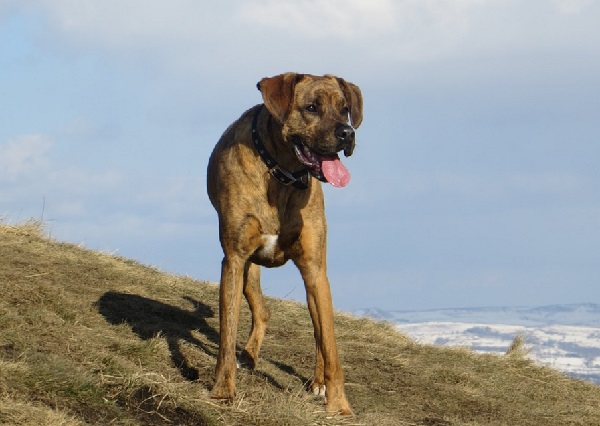 Boxers and Labradors are some of the world’s most popular dogs. Both are incredibly friendly and react well to humans. As are most dogs, they are very loyal and loving towards their owners. Boxers in particular have a long history of loyalty towards their family. They are distrustful of strangers, due to their protective nature. But they are kind and gentle with children, making them ideal family pets. Labradors are highly intelligent, friendly and outgoing dogs. They are also very playful. Their keen sense of smell has seen them adopted by the Navy as tracking dogs; their sense of smell is so good that they often stay on the scent until whatever they are searching for is found.

So with two desirable dog breeds being crossed, what could a hybrid be like? To truly figure this out, we’ll need to analyze each breed a little more and understand where their traits come from. 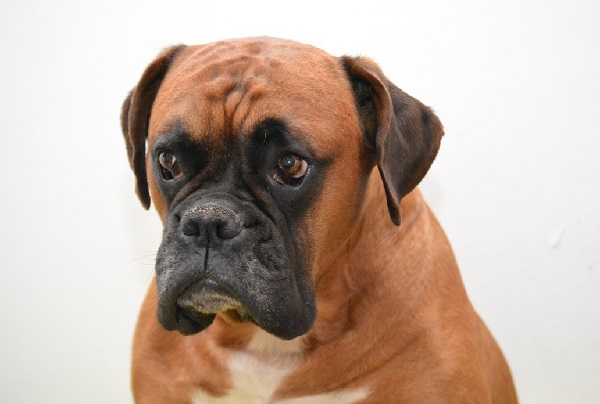 Boxers originated from Germany and were first exhibited for St. Bernard’s in Munich, 1895. According to the American Kennel Club, they are now the 8th most popular dog breed in the United States.

They have a distinct head shape, most notably the muzzle, which should be in direct proportion to the rest of the head. In perfect breeds, the muzzle will be at a ratio of 1:3 to the rest of the skull. Folds will always appear further up the muzzle, above the nose and on the snout, another defining feature. They also have an under bite that bends upwards, giving them a rather amusing facial expression.

They are a shorthaired dog with a tight coat. It is generally a smooth and shiny coat, usually colored in fawn (various shades of tan) and brindle (black stripes on a fawn coloring), often with a white underbelly. In the United Kingdom and Europe, they are usually fawn with rich colorings.

But there are also white Boxers, which are neither rare nor albino, counter to popular suggestion. About a quarter of Boxers are white Boxers. Genetically, these are fawn or brindle Boxers, but with excessive white markings.

In terms of their temperament, they are very intelligent and playful. They are playful with children but also very gentle. As active and strong dogs, they require frequent exercise to prevent boredom, which often manifests in the form of chewing furniture or digging up the lawn. By nature, they are not aggressive dogs by any means. 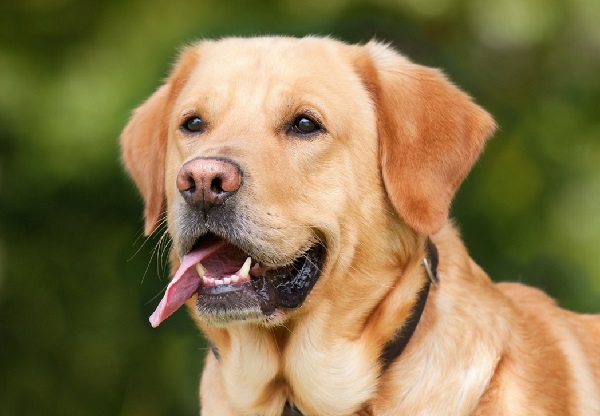 As they have been used as working dogs, Labradors are intelligent animals with a high work ethic. Roughly 70% of guide dogs in the United States and Canada are Labradors. An example of their intelligence was demonstrated by Endal in 2001, which retrieved an unconscious human from an emergency situation, retrieved his mobile phone from the car, placed him in the recovery position and put a blanket over him. Endal then ran to a nearby hotel to find more help. Incredible.

They are usually a blond or golden color, but also black or chocolate. As they grow older they tend to get a bit gray around the muzzle and paws. Out of all dog breeds, studies have suggested that Labradors are most likely to become obese. They like to eat a lot, and without proper exercise they will almost certainly become morbidly obese. They need at least thirty minutes of walking twice a day in order to remain healthy. 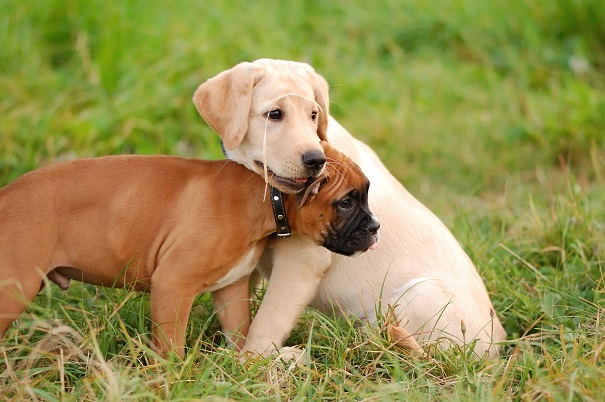 Rare crossbreeds can cost up to $3,000, and celebrity endorsements have only accelerated the concept of ‘designer dogs’. The danger lies in that crossbreeding dogs secures only the strong and desirable aspects of each breed, eliminating the usual illnesses and ailments that particular breeds are associated with. Some have gone as far as to say that crossbred dogs are ‘hypoallergenic’, meaning that they won’t affect those whom are normally allergic to dogs. This is a myth and in fact many crossbred dogs are far more vulnerable to illness and infection than purebred ones.

Thousands of dogs sit in cramped cages awaiting their new owners. People who unsuspectingly purchase these dogs find that they have to euthanize the dog shortly after purchasing it due to parasites, kidney and heart problems.

The main problem lies in the idea that by crossbreeding two dogs you get a hybrid, or that a bigger gene mix results in a healthier animal. In many cases this is true, but the myth is that it is true all the time.

Also known as the Boxador, Boxer Lab mixes seem intimidating due to their huge size. Recognized as a designer dog by many organizations, such as the Designer Dogs Kennel Club, American Canine Hybrid Club, the Dog Registry of America and the International Designer Canine Registry, they are actually just as friendly and loving as both Labradors and Boxers.

Thankfully, unlike many crossbred designer dogs, Boxer Labs are actually quite healthy, but they do share they same health risks as their parent breeds. Firstly, they have the same tendency to over eat, like a Labrador. They need frequent exercise and a strict diet to prevent them from eating too much, as well as to prevent boredom, like the Boxer.

Boxer Lab mixes are often allergic to grain in dog food, which means they require a rigid and specific diet. This can lead to excessive licking and skin irritation, so be sure to use grain-free dog foods. 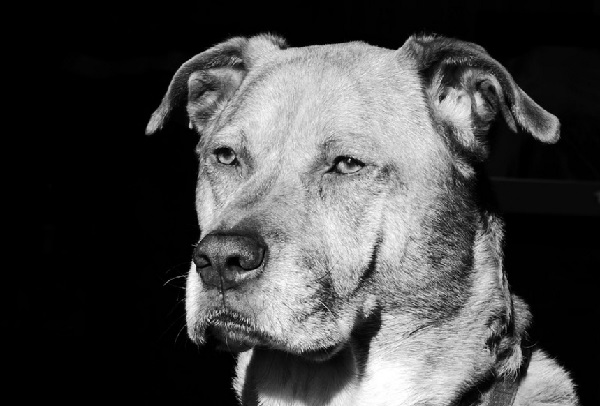 Like many Labradors, this mix often suffers from poor joints, particularly the hips, as they age. At this point, it is best to keep them out of cold waters, which can cause a lot of pain and discomfort as they dry. Labradors famously love the water. This will often lead to bad arthritis, as they grow older. Sadly, they will always have that love of splashing about but it is something you’ll have to deter them from.

A Boxer Labrador mix weighs about 50 to 110 pounds and can grown anywhere from 23 to 25 inches in height.

They have a shiny short coat like Boxers, and these come in singular colors of white, brown and brindle or a combination of these colors. They have larger heads than a Labrador, making it more similar to a Boxer than a Labrador, with floppy ears and a curly tail, which, sadly, is often snipped. Sometimes a Boxer Labrador mix will look more like the Boxer and sometimes more like the Labrador. Their eyes are often dark brown in color, which are very expressive.

As with Boxers and Labradors, the Boxer Labrador mix has low to moderate grooming needs, but this is dependant on the time of year as they shed depending on the season. When not shedding they will just need a brush once a week to keep their coat looking healthy. However, when shedding, they need daily brushing to remove loose hairs, meaning you will need to do more cleaning up after them on your furniture and clothing. In terms of bathing, they need a bath more often when shedding as it helps to control the hairs. Once a week during the shedding season is a good idea. But when not shedding, bathe as and when it’s necessary.

Check out this cute boxador puppy:

The Boxer Labrador mix is an easy dog to train due to their intelligence and desire to please its owner. They listen attentively and obey most of the time, so will need less repetition and will learn faster than other breeds. Even with their friendly nature, training and socializing are very important. It will help make them better dogs, they will be a much happier dog, and you will have an easier time with them. Make sure when you are training that you are firm but positive. Use praise and rewards to motivate them, as with any training of a dog; they learn through association.

There are a number of costs involved in owning just about all dogs, so you need to be able to meet those in order to provide the best for your dog. The costs you will need to consider with the puppy are somewhere between $500 to $850 dollars depending on where you are, who you are buying from and how popular the mixed breed is at the time. You should always purchase from a trusted breeder. Other costs will include spaying and micro chipping, blood tests, as well as accessories like a food bowl and collar if you have not previously owned a dog. There will be costs you will need to cover each year, like veterinary check ups for things like flea treatments, training, licensing and such others. But these are normal costs that you should have considered for any dog that you would consider purchasing.

This is an incredibly wonderful dog that requires care and love, just like any other. They are social and active, and therefor require attention and exercise, making them unsuitable for someone unwilling to provide these things. You families are an ideal owner of the Boxer Labrador mix, as they are good with children and become great members of the family!