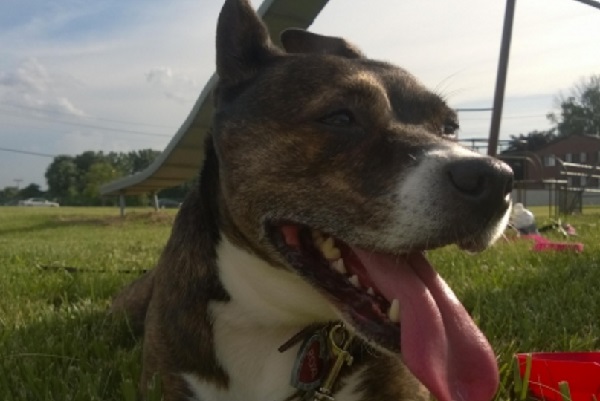 German Shepherd Pitbull mix, also known as German Pit, Shepherd Pit or German Sheppit, is a large mix breed dog. They are a common hybrid that live from 10 to 12 years. These powerful dogs are frequently deployed as guard dogs in the United States. They need firm handling and early socialization in order to curb their aggression, which is most often directed at other dogs. Early socialization can also help in getting them used to humans. But to fully understand this dog, it is necessary to know some more about both its parent breeds: German Shepherds and Pitbull terriers.

German shepherds have a beautiful coat. Their distinct black and brown combination is seen upon a thick, double coat, which come in two forms: long and short haired. The long-haired variety derives from a recessive gene, making long-haired German shepherds rarer. German shepherds typically have a black mask upon their face and a black saddle on their back body markings.

They are large sized dogs. Males can average at around 24 to 26 inches in height, while females are smaller at 22 to 24 inches. If kept active, their weight should be around 66 to 68 pounds.

German shepherds were originally bred for the task of herding, making them highly intelligent dogs. They can learn simple tasks after roughly five repetitions, responding to initial commands 95% of the time. They’ve been called the third most intelligent dog, coming just behind Border Collies and Poodles.

Common illnesses in German Shepherds come as a result of their history of being crossbred to produce the modern breed. Common ailments include hip or elbow dysplasia, which can be painful in older age, often leading to arthritis. A sample study in the University of Zurich found that about 45% of police force dogs would suffer from spinal stenosis, which is a degenerative disorder.

But they are less likely to suffer ear infections than other dog breeds. Their large outer ear canal does not hold much hair for moisture or general debris to gather in. As with most large dogs, German Shepherds have a life expectancy of about 10 years.

In 1899, Max Von Stephanitz visited a dog show in Germany. He saw a dog called Hektor Linksrhein. Hektor was the result of numerous generations of very selective cross breeding. He was exactly what Von Stephanitz felt was the perfect working dog. The dog’s strength, intelligence, loyalty and beauty convinced him to purchase the dog. He changed the dog’s name to Horand von Grafrath, who was later declared to be the first German shepherd.

German Shepherd’s strength and intelligence, the main desired features of their original breeding, has led to their implementation in numerous fields outside of herding as they were first intended. They are the most common breed of police dog. They are often used in tracking, patrolling and as sniffer dogs for narcotics and illegal substances. They are the most common form of sniffer dog because they have an incredible sense of smell and intelligence and responsiveness in training. They have been used in the military for the same reasons. ‘Scout duty’ is often given to German Shepherds. This entails them warning soldiers of approaching enemies or traps, like mine fields or explosives. They have even been trained to parachute into conflict zones by certain military groups.

But despite being a crossbred initially, German Shepherds lie at the center of one of dog breeding’s largest controversies. It has been criticized that the German Shepherd of today has strayed from Von Stephanitz’s original vision that they should be bred as working dogs. It is also felt that breeding should be controlled more so as to eliminated cross breeding defects quickly. Von Stphanitz’s feeling that the German Shepherd should be bred for its Strength and intelligence in relation to their exceptional working ability has been dismissed by many in the industry of designer cross-breeds, specifically, the show-strain breed of German Shepherds.

In the United Kingdom, The Kennel Club has criticized German shepherd breed clubs about the morals of breeding show-strain German Shepherds. These dogs have a low-sloping back, which results in poor gait of the hind legs; working dogs normally retain a straight back. Show-line German Shepherds have been described as “half dog, half frog” by many, recognizing it as Frankenstein’s Monster of the canine world. Orthopedic vets suggest that it is not a normal posture for a dog, leading to criticism on the ethics that contribute to producing a show dog that was never intended to be. 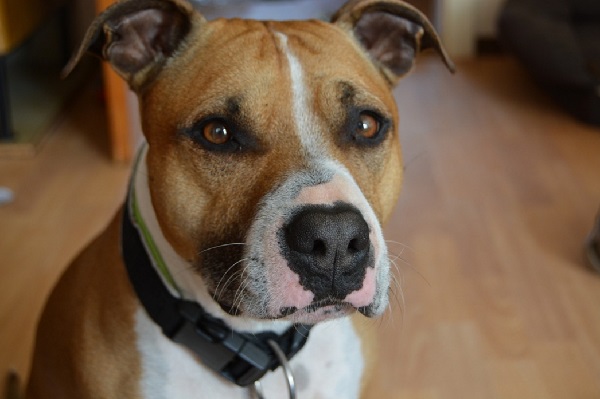 Pit bulls were originally used as fighting dogs; early Britons adopted a version of the Molossian dog, which demonstrated compassion and loyalty towards their owners. Roman Emperor Claudius was so impressed by the dogs to the point that he shipped many back to Rome where they were crossbred with a Roman equivalent. There forth, the dog was dispersed throughout the Roman Empire and used as a fighting dog in armies. The long-term mix breeding throughout Europe led to a melting pot of bulldogs, which are the direct descendants of the modern American Pitbull.

Modern Pit bulls are highly intelligent, strong and loving animals. They show great respect for a strong willed owner, making it important for you to form a strong relationship together to train them well. They respond well to authoritative behavior from their owner, and will ultimately be a better dog if trained from a young age. They will respond well to a commanding personality and discipline.

They have a lot of energy and need regular exercise; at least 45 minutes to an hour of exercise every day. Without this, they’ll become irritated, hyperactive, potentially aggressive and generally badly behaved. So as an owner considering a Brindle pitbull, it is important that you are also active with the dog.

They’re very loving and gentle animals, despite their rough-looking exterior. As previously mentioned, they grow very close to their owners, but are not that protective. They’re pretty mild mannered and friendly, but due to their history in blood sports; many would believe that they have a dislike for humans. But this is untrue. Well-trained and obedient pit bulls are very loving towards their owners.

Like all short-haired dogs, they’re low maintenance in terms of grooming requirements. They don’t shed their hair very often, regardless of what time of year it is.

Because pitbulls are a high-energy dog, they need a balanced diet. They should be fed high protein foods, such as chicken and red meats. A chicken based kibble is a good place to start, and adding a raw egg to their daily diet is also very beneficial. You can crush up the eggshells into a fine powder and sprinkle them over their food to add extra calcium, which will help their bones, as eggshells contain high levels of calcium. Eggs are quite a complete food source for dogs and make a great addition to any dog’s normal diet. 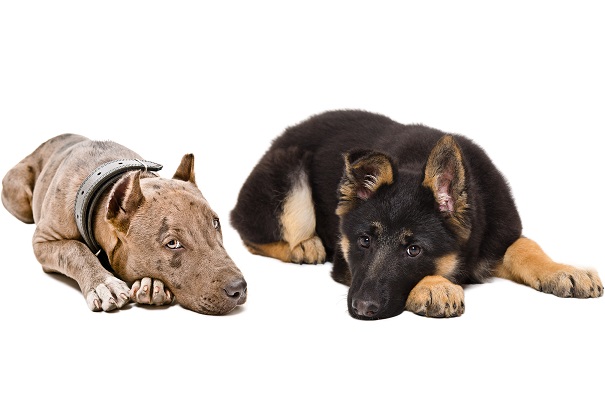 The show-line German Shepherds is only one of many examples that make up the controversy of canine crossbreeding. ‘Designer dogs’ represent a huge, moneymaking industry. Rare crossbreeds cost up to and in excess of $3,000. Celebrity endorsements have only accelerated the concept of ‘designer dogs’. The danger is the presumption that crossbreeding dogs secures only the strong and desirable aspects of each breed, removing the usual illnesses that particular breeds are associated with. Many go as far as to say that crossbred dogs are ‘hypoallergenic’, meaning that they won’t affect those with dog allergies. This is untrue, and in fact many crossbreeds are far more vulnerable to illness than purebred dogs.

In the last 20 to 30 years a huge increase in breeding mixed dogs or hybrids deliberately has become popularized. Some results have been hugely popular, and some not so popular. In many cases too there is very little information as to who originally bred them and why. Sadly this trend has attracted the sort of people who do not care about what they are breeding or the health of the animals, and are just making money from people who should not be buying from them. With the German shepherd Pit bull Mix it is assumed that the desired outcome was a dog with the loyalty and brains of the German shepherd and the agility and power of the Pitbull. However there are no guarantees with these dogs. You can get different looks and personalities in the same litter.

The German shepherd Pit Bull Mix is generally a calm dog which can actually be quite timid with people but aggressive with other dogs. This requires early socialization to help him with their interactions, both with people and other dogs. With a trained and socialized dog you can expect it to be more dominant with other dogs though less aggressive. They enjoy spending time with their owners, but they aren’t going to be demanding attention all the time. It is a dog you can leave to entertain itself or nap while you get on with something else without tripping over the dog all the time. However, they do not like being left alone for long periods of time. They are energetic animals whose behavior will be a lot better if you give frequent exercise.

They are generally large dogs. But as previously noted, the breeding is unpredictable and there are no guarantees. Usually they will weight about 65 to 80 pounds and can be as high as 25 inches tall at the shoulders. They can look like a Pitbull, with a short muzzle and ears that are bent, or like a German shepherd with a longer muzzle.

Check out this handsome German Shepherd and Pitbull mix dog:

The coat is short to medium in length, with thick, dense fur. Common colors include gray, white, tan or black.

They need a lot of exercise due to their high energy levels. Both parent breeds are high-energy dogs, and so you can guarantee that a mix breed is going to be the same, if not higher. Apartment living is definitely a bad idea. They will need a yard to run in, daily exercise; perhaps up to an hour a day.