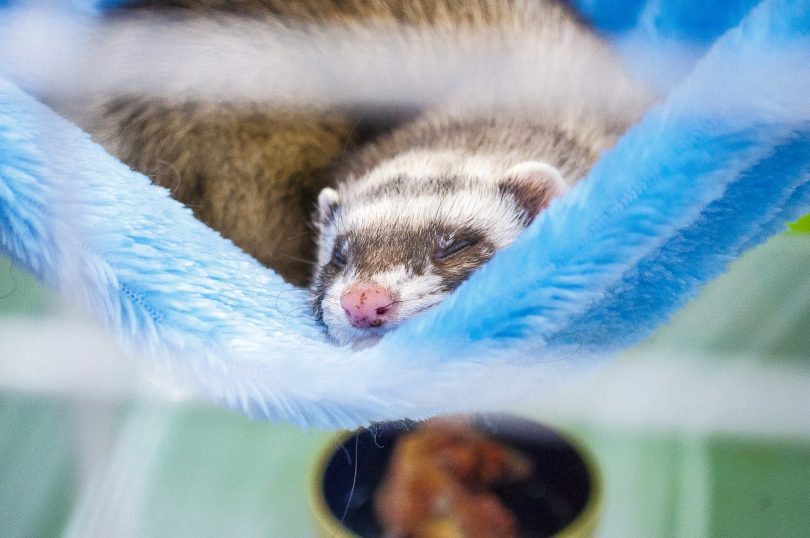 Ferrets are funny little creatures who love to play a lot and… yeah, sleep a lot as well. Either you’re the owner of one or you’ve seen them at one of your friend’s place, you know what we’re talking about here. Ferrets can be very active one moment and then fall into deep sleep the next. So if you’re curious how long do ferrets sleep and why, this post will answer to those questions.

They can be so cute and funny playing around like crazy, and one second later you just see them spread out wherever they could find a place – of course not in their cage – unmoving and unresponsive to yells and touch, and sometimes even when you try to pick them up. They appear dead when in fact they’re sleeping deeply.

How Long Do Ferrets Sleep

Many new ferret owners feel like there’s something inherently wrong with their long furry friend because he’s sleeping so much, when in fact, it’s their normal way of being. Depending on age, gender and time of year, ferrets usually sleep between 18 to 22 hours a day. This might seem surprising for most owners, since it seems so much and wrong compared to the needs of other animals or even us.

Ferrets are active for only a short time every day, up to 20-30% of the day. This doesn’t mean that they will sleep for 20 hours straight, but more like periods of 6 hours with active or play time in between. In general, the most active ferrets are the young ones, as they have a need to explore the most. Baby ferrets will sleep a lot more and in general, male ferrets are more lazy than females. Old ferrets will sleep more as well.

Also, depending on the season or the place on the globe, a ferret’s sleep pattern might be different. In cold climates or during winter, most ferrets will sleep longer due to the cold.

Most owners, when faced with this ‘dead sleep’ situation – when the ferret won’t wake up even when touched, picked up or moved around – for their first time, think that their furry friend the ferret is dead, hence the name of this deep state of sleep. They couldn’t be further from the truth. Their ferret is sleeping too well to be disturbed.

While this doesn’t occur with all ferrets, some will do it quite often. Most of the times it’s something normal, but in some cases, it can be a sign of an illness called insulinoma, but that can be taken as a sign only when it comes with other symptoms as well.

So if your new pet friend is a ferret, keep calm and let him be, as he’s only taking his long – very long – daily nap, so there are no real reasons to worry.