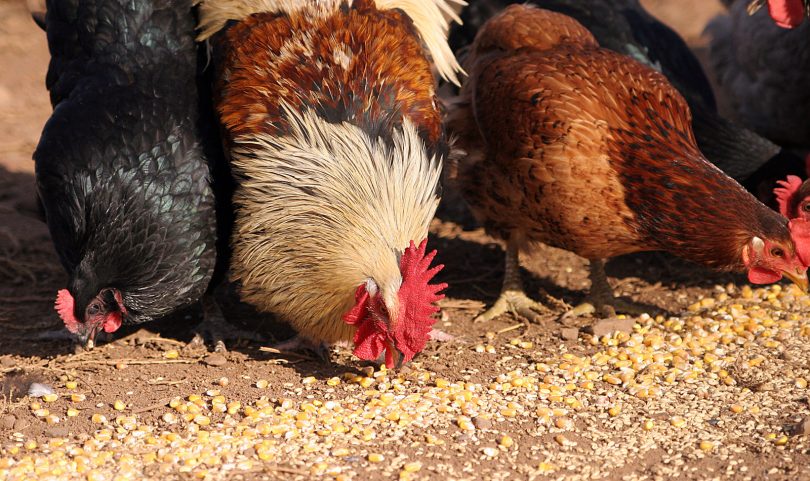 Chickens need properly formulated feed that is appropriate for their age but sometimes you have some leftovers that you don’t want to throw away so can chickens eat corn? How about corn cobs? Let us find out all about this and if corn is something that can do them good or harm.

There are many bad ideas about feeding hens and chickens with things like wheat or all the scraps from your kitchen and since formulated poultry feeds didn’t exist in the past this is not something that should surprise us. The reason why these feeds have been created is to help the hens lay out more eggs.

Before the commercial research on chicken feed, the pure breeds were fed grain mixes or dried mash chicken feed that also contained fish or meat to increase the protein content. Since at that time hens could roam freely through a large area they would supplement their diet with the things they foraged such as insects or worms which are great sources of proteins as well as vitamins and minerals. 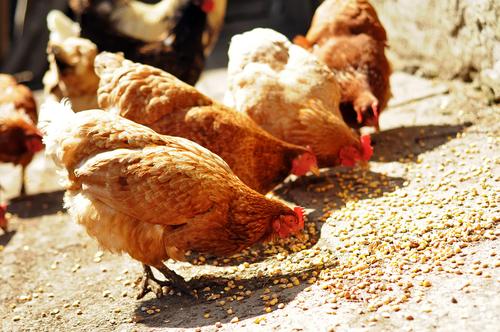 Now many farmers have a lot of corn and this is where the question: “can chickens eat corn exclusively?” first arrived. They will love corn and will probably eat it before anything else you give them but this doesn’t necessarily mean that it is a good idea to restrict their menu to just one item even if that item is really good for them.

Most commercial chicken feed has corn as the main ingredient as it is relatively inexpensive, easy to get and has the carotene that will make the egg yolks have the wonderful yellow color. To add to this, it also contains carbohydrates that will give energy to your chickens but it is only one of the ingredients, not the entire diet.

Corn is low in fiber and it is the easiest grain for chickens to digest. Its nutritional value varies from one variety to another and from one location to the next but it is estimated that it provides around 1520 kcal/lb of energy for poultry. It contains proteins in a percent of around 7.5 and it has calcium and phosphorus.

There are some things that the corn doesn’t provide though and this is because chickens don’t produce enough phytate, the enzyme needed to break the phytate and release the phosphorus. This means that they won’t benefit from all of the nutritional properties of corn and you will need to supplement the diet with a source for this enzyme. 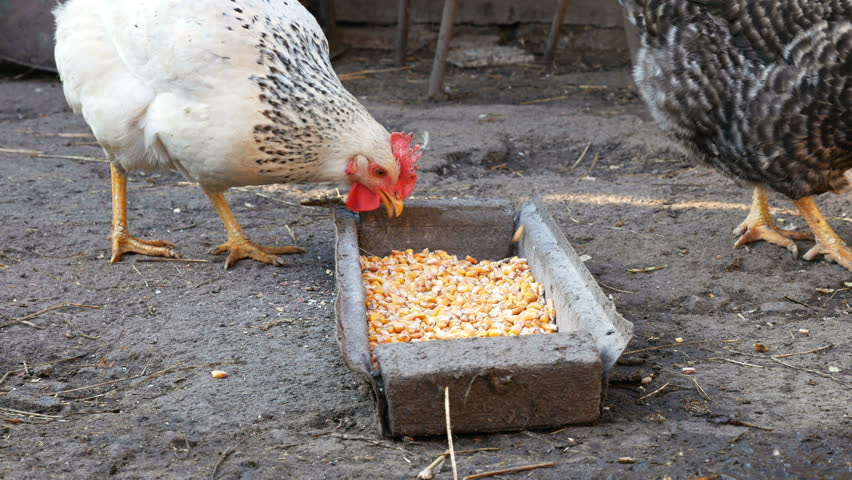 The carbs will provide your chickens with an energy boost but in the end they will probably get obese and malnourished at the same time from the lack of nutritional elements if corn is the only thing on their plate. Not to mention that if the hens get too fat they will stop laying eggs so that is definitely something that you want to avoid. If continued for a long time you are going to encounter health problems and diseases so think about ways of mixing something more to these snacks.

Chickens make a lot of mess when they eat since they are scavengers by nature and they tend to also waste a lot of food. To prevent this from happening and also balance their diet more you should stop providing them with constant access to feed.

If they are hungry they are less prone to waste food or be to picky but this idea only works when the weather is warm. During the cold months you will want to ensure as much feed to provide them with more energy and nutrients to last through the winter. 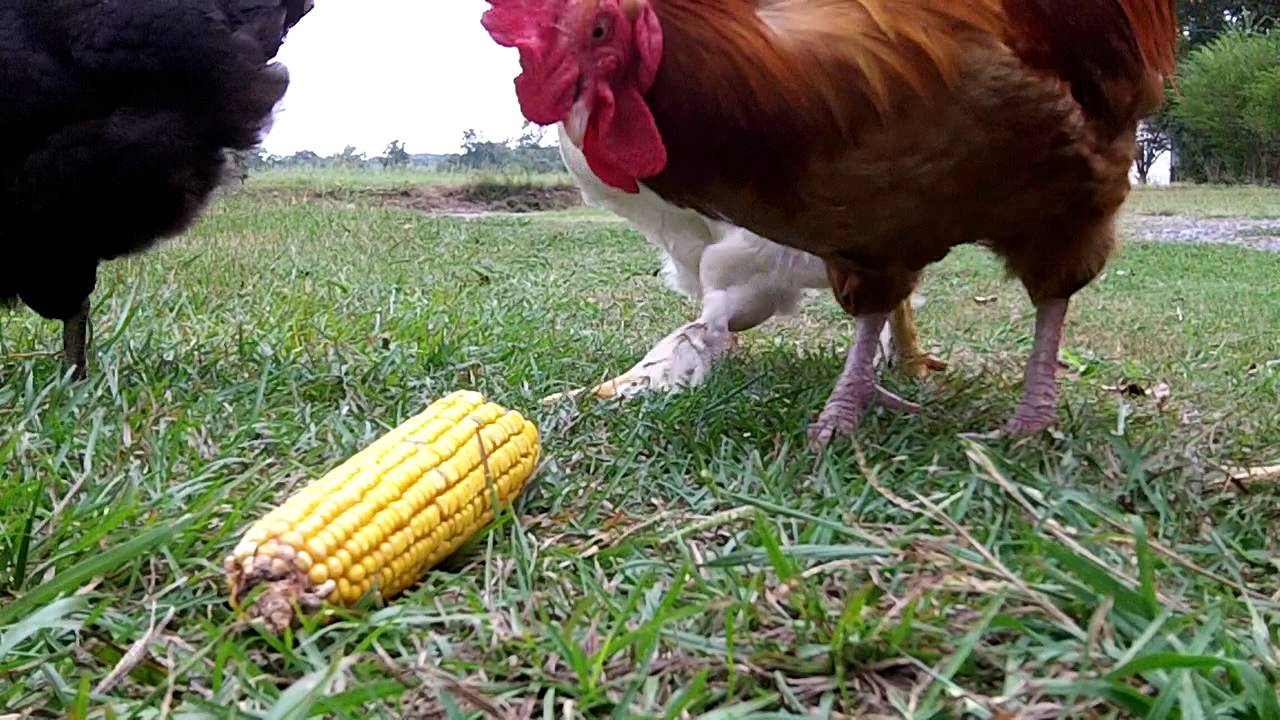 One of the feeds that you can find commercially is mixed corn which contains around 80 to 90% wheat and 10 to 20% maize. This is useful as scratch feed since it will keep the hens active, looking for the grains they love most. At the same time though, this should be considered more of a treat since even in this proportion this feed is fattening and doesn’t provide all the needed nutrients (proteins especially lack from it).

If you throw a few cups during the afternoon will mean that the chickens will remain well fed through the night but this isn’t meant to be the only food they have. This thing changes though during the cold seasons since in this case you want as much energy for them, as we mentioned above.

Rounding Up The Menu

As we saw, you don’t need to cut corn from a chicken’s menu but it is important to worry about their diet and try to balance it as well as you can. You might think it easier to just buy some ready-made feed but that isn’t the best solution either.

If your chickens are free-range then their nutritional problems are somewhat simplified since they will pick what they need. They know what is good for them and will not eat things that can poison them, so you can rest assured in that matter. If they aren’t free-range then you need to supply them with grass clippings and this is also some way of allowing them to forage through the greens. 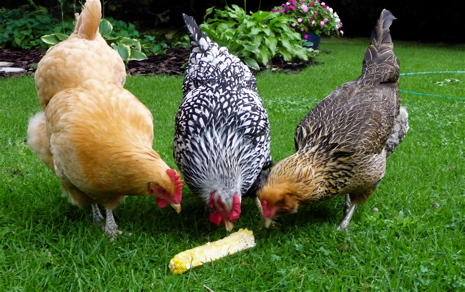 One of the best ways of determining the overall health and nutrition of a chicken is by checking out their yolk. If the color is very pale this means that the chickens don’t get enough greens in their diet and thus you need to add more grass, clover or even plantain.

Chickens that free range all day long will probably have the darkest yolk color and you will probably even notice variance in the same flock since each of them will have a different temperament, some prefer to explore more, while others will be satisfied with the commercial feed.

Yes, they can eat corn and will love it but this doesn’t mean that it should be more than a treat or energy booster for them. It doesn’t provide the needed nutritional elements and thus it will make your chickens obese if fed in excess.