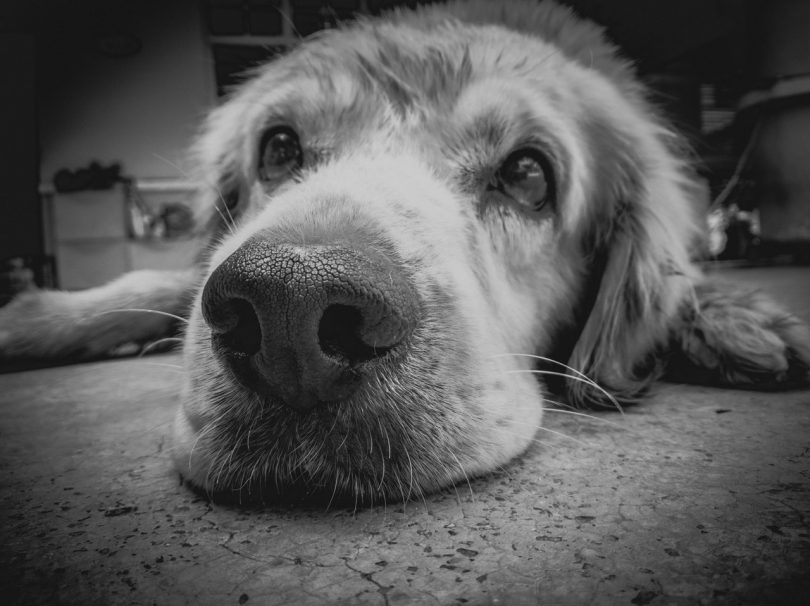 Dogs and humans have many things in common. In addition to a friendly nature and love of sugar, dogs and humans, unfortunately, share some diseases as well.

You and your doggo could both suffer from diabetes, cancer, congestive heart failure, and epilepsy. Could these shared diagnoses apply to Down syndrome as well?

Many owners claim that their dogs have Down syndrome. This condition so far is uniquely associated with humans.

But if your dog shows similar symptoms, could it have Down syndrome?

Is it even possible?

Read ahead to find answers.

What is Down Syndrome?

Down syndrome, as it applies to humans, is a genetic disorder. We are born with 23 pairs of chromosomes in our cells. Chromosomes make up the genetic material that makes us, us.

Down syndrome occurs when a baby is born with an extra copy of the 21st chromosome. This additional copy could either be full or partial.

It may seem like a minor problem in the DNA. However, this extra chromosome can cause significant physical or mental changes in the individual.

People with Down syndrome may have the following characteristic traits:

Symptoms are not limited to the above, of course. The condition could manifest itself differently in individuals.

Down syndrome can be diagnosed in humans either at birth or prenatally. At birth, doctors can diagnose the condition through certain physical traits. Blood tests that examine chromosomes are more accurate. Pregnant mothers can undergo various tests for diagnosing Down syndrome in the fetus.

Down syndrome cannot be cured because we can’t alter our genes. The condition can be managed, however. Children with Down syndrome may get therapy and medications to manage both physical and mental symptoms.

Can Down Syndrome Affect Dogs?

Down syndrome in humans is well documented and researched. Unfortunately, the jury is still out on whether the condition affects animals.

Some pet owners may speculate that their beloved dogs and puppies may have Down syndrome. But the condition has not been observed clinically by veterinarians.

There are genetic reasons that people can get Down syndrome, while dogs may not. Though we do have many things in common with our four-legged counterparts, our genes do differ.

While people have 23 pairs of chromosomes, dogs are born with 39 pairs. So the 21st chromosome pair in humans is not found in dogs. The way chromosomes duplicate into pairs during the fetal phase differs between species too. Therefore, it’s safe to say that dogs may not get Down syndrome the same way people do.

It’s difficult to know whether Down syndrome in dogs exists. Until now, genetic tests to check for the condition in dogs have not been carried out.

Chromosomal abnormalities in dogs are difficult to diagnose compared to humans. That’s because most doggies born with such conditions die early during puppyhood.

Testing Your Dog for Down Syndrome

You can, technically speaking, run a blood test on your dog to check for possible Down syndrome. However, as mentioned earlier, there are no established tests to recognize the condition in dogs.

If you suspect your dog of having Down syndrome, it’s best to seek vet care first. Ask your vet for advice on getting a diagnosis and how to proceed.

Conditions in Dogs That May Look Like Down Syndrome

Just because there’s no evidence of Down syndrome in dogs, that doesn’t mean your pooch isn’t afflicted by something else. There are certain other health issues in dogs that mimic Down syndrome in people.

Like humans, dogs do get developmental and congenital conditions due to genetics. Your dog could be affected by a similar condition, though it’s not Down syndrome.

One congenital condition in dogs that can look a lot like Down syndrome is hypothyroidism. If a puppy is born with no levels or very low levels of the thyroid hormone in its body, it can suffer from mental or physical symptoms that look very much like Down syndrome.

Puppies born with growth hormone deficiency might be small in stature. Dogs do get affected by pituitary dwarfism, which makes them look smaller.

Dogs can end up with unusually broad heads because of a condition called congenital hydrocephalus. Another unrelated condition called portosystemic shunt might make puppies walk differently.

Getting Your Dog a Diagnosis and Treatment

If you notice anything unusual in a puppy’s developmental stages, get a diagnosis for the condition from a vet. Any Down syndrome-like symptoms in dogs should be reported to veterinarian specialists for a formal diagnosis.

Vets may run blood tests or collect bodily fluids when examining the dog. Pay attention to these tests, as they can tell you exactly what’s wrong with your pet.

A dog with behavioral or physical health issues can take a toll on owners. That’s why it’s important to have the doggo checked out by a professional vet.

Once you have a diagnosis report in your hand, your vet will instruct you on how to proceed. Certain conditions, like dwarfism, cannot be cured. But it’s possible to manage such congenital conditions in dogs with physical therapy.

It’s important to avoid speculation. Don’t presume that your dog has Down syndrome. Get confirmation by contacting the right pet healthcare people.

Early diagnosis leads to early treatment. It may help your dog recover fully.