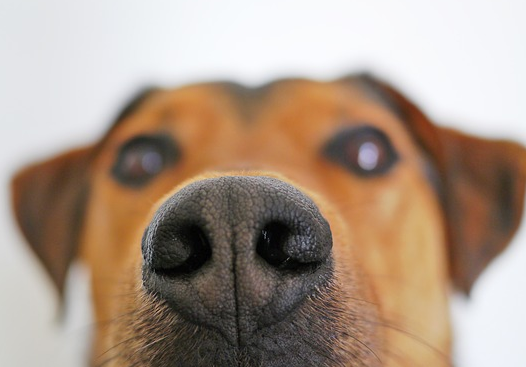 Dogs’ noses come in different shapes and sizes, varying from the long Collie nose to the pushed in Pug nose. Their noses are equipped with 200 million smell receptors, which grant them an increasingly better smell sense in comparison with humans, as we have only 5 million smell receptors. Have you ever asked yourself – do dogs have boogers? The answer is yes, dogs have boogers indeed. As a matter of fact, this particular question is not that odd. Read on to find out more useful facts about your canine’s nasal discharges.

Dogs can suffer from upper respiratory infections that are accompanied by this particular symptom. Allergic dogs can present nasal discharge and watery eyes. As a matter of fact, a runny nose is one of the main indicators of an allergic reaction. A nasal discharge can also occur as a result of something that remained stuck in your dog’s nose, for instance, a tiny blade of grass or a seed. If that is the case, you may notice that your dog is patting the nose with his paws, trying to get it out. Dogs can also present nasal discharge as a result of the presence of pus, mucus, viral, fungal or bacterial infection. Nasal discharge can also be due to a polyps or tumor inside the dog’s nose.

However, some canines may just be extra susceptible to nasal discharge than others. These include dog breeds with soft and floppy nose cartilage or flat-faced canines. 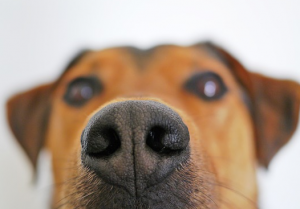 Do Dogs Have Boogers?

There is a list of conditions that can cause boogers from nasal discharge. It depends on how thick or runny the nasal discharge is. Sometimes, the discharge can indicate that the dog is affected by an infection or something that remained in the nose. However, most of the times, boogers don’t pinpoint a real problem you should worry about. However, if you notice the nasal discharge presents signs of blood, that might be the signal of a more severe problem and you should take your furry companion to the vet for observation.

When you’re examining your dog’s nose, do it carefully since it is utterly sensitive. Poking your dog’s nose on the inside, in particular, may contribute to provoking a nose bleed. This is more likely to happen in dogs with shorter noses.

What Does a Runny Nose Indicate?

While you may associate your furry pal’s runny nose with the run-of-the-mill cold, that is not always the case. As I already mentioned, dogs are affected by a myriad of respiratory infections. For instance, distemper is a severe condition that is accompanied by a runny nose and neurological symptoms. However, this health condition is hindered by vaccination. Another condition may be a kennel cough. The good news is you shouldn’t worry about it either, as your dog is probably vaccinated against this ailment as well. The bottom line is that if you notice signs of an unusual runny nose, a trip to the vet is in order.

Why Does a Dog’s Nose Change Color?

A dog’s nose color can change due to many reasons. Be it the case your dog gets a sunburn, if it has a light-colored nose, you may notice an unusual reddish shade as a result of the sunburn. Dogs that present fair and more sensitive noses will show nose color change, with the new season, mostly with winter season.

“Winter nose” or “snow nose” is the most common reason why a dog’s nose will change color. It may fade from black to brown or pink during the winter months.

Another possible change of nose color is s skin condition called vitiligo. This is an immune disease that will cause a dog’s nose to change color. However, this condition is not a health concern and can be easily cured with nutritional supplements.

Many canines lose their nose color because of the illness or some type of trauma. The color should return once the dogs have recovered.

More serious disease such as Lupus Erythematosus will cause a dog’s nose to lose color. This condition will also lead to inflammation and scaly skin around the face with lesions along the ears.

Most of the time there is no need to worry about the changes in your canine buddy’s nose color. This may also be just part of the aging process. When the dog ages, the enzyme producing pigmentation doesn’t create enough color. However, it’s always best to consult with the veterinarian to make sure the color loss is not something serious.

Why Do Dogs Have Wet Noses?

Dogs’ noses are wet for two main purposes – to help them smell better and to maintain them cool. While most dogs sweat through the pads of their feet, as a matter of fact their nose is equally important for this sole purpose as well. The smooth layer of moisture visible on your dog’s nose is mucus that offers a positive surface for melting chemicals that might be present in the air and ingesting them. If your dog is more active and is permanently alert and sniffing everything around, he will have a wetter nose in comparison with a less active canine.

Does a Dry Nose Indicate a Health Problem?

This is a wrong popular assumption. While an active dog might present a wetter nose than a relaxed one, a dry nose is not a clear indicator that a dog is sick. Other symptoms may pinpoint that a dog is dealing with a health problem. For instance, an excessively wet nose can indicate a respiratory illness, only if it is increasingly more severe and if you notice an additional thick abnormal discharge.

When you Should Go to the Vet

Try to get to know your dog’s nose and its discharges when your buddy is healthy and well so you could easily spot any abnormal secretions later. Generally, you don’t have to worry about a dog’s nasal discharge that is clear unless it lingers or there are other symptoms. However, discharge that’s yellow, green, or smelly is always cause for concern and you should consult with the vet.

Do Dogs Get Headaches