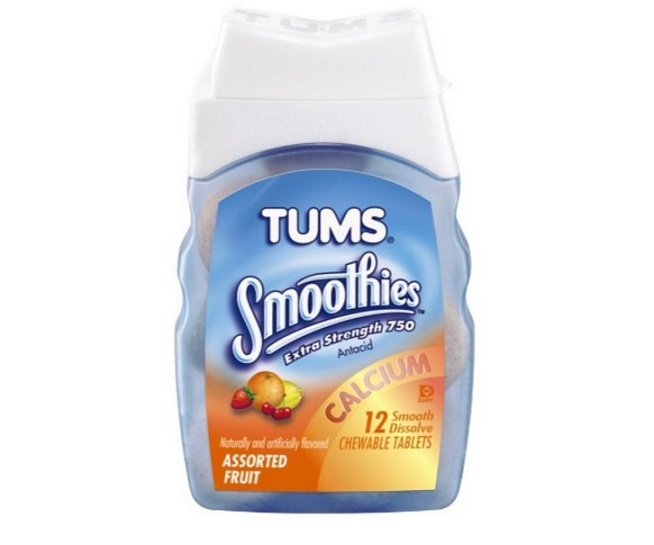 Tums is an over the counter brand of antacid consisting mainly of calcium carbonate with some added sugar (in sucrose form).  It is widely available in the United States and provides relief from problems caused by acid indigestion, heartburn and indigestion (sour tummy).  It is available in different flavors, but is always consumed orally as a chewable tablet. 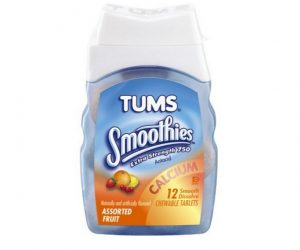 Can human tablets be used for dogs?

It is also taken by some people as a straight supplement to increase their daily calcium intake.  So if any of the family is feeling a little queasy, Tums and antacid remedies are a great way to relieve the symptoms, but what about if the dog is looking a little under the weather?

There is nothing worse than seeing your dog suffering, and not knowing if you can use a solution which is close at hand. Can dogs have tums?

The short answer is that yes, you can feed dogs Tums but there are better and healthier alternatives.

Generally with an upset stomach in your canine friend, time really is the best medicine.  Dogs are generally pretty resilient creatures, and while there may be some brief distress, it will go away naturally, often as quickly as it came.

Dogs are known for their faster digestive systems and most problems are usually sorted out naturally without medicine.  By the time administered medicine starts to work, the problem has often been resolved by itself.

Another salient piece of wisdom is that prevention is better than cure.  If your dog is looking unwell, knowing what has caused it, and taking steps to prevent it happening again is your best option. Try to avoid masking the symptoms with Tums and not uncovering the root cause.

It is understood that this is not much use when the dog is lying there in clear pain, but it is an important side note anyway.  House plants are often a cause, many of which are toxic to dogs. Check the leaves around the house and make sure Fido isn’t nibbling on them.

As mentioned previously, it is generally advised that the best thing to do is to do nothing at all.  There are also some other things to be aware of that may help and prevent problems.

Regular mealtimes are a great way to stop issues with the stomach.  A consistent eating time will bring about the onset of natural digestive juices before eating.  These then help in the process of breaking down foods.

Changing a dog’s food can cause problems, so if you are looking to swap the food you are feeding your dog, try to do it slowly. Mix the two and gradual increase the proportion of the new food compared to the old one.

Dogs will often eat grass as a way of detoxing and cleansing their system.  This induces vomiting and clears out whatever was causing trouble in the first place.  If they are suffering from diarrhea, be sure to give them plenty of water to prevent dehydration.

Other more natural and effective remedies include mashed up pumpkin.  This can help to provide relief for a lot of stomach and bowel problems.

What if you want to add calcium to your dog’s diet?

If you want to increase the calcium levels of your dog, giving them Tums is probably not the best or most efficient way to do so.  Calcium is usually present in all dog food so it is not that common for dogs to have calcium deficiency.

Overfeeding can lead to problems in the pancreas too. Often what is more important with dogs is the ratio of calcium to phosphorus in their system. Ensuring your standard dog food contains calcium (around 100 mgs per serving) should be sufficient.

Tums itself is not toxic to dogs when given in normal doses and will not harm your dog, but always bear in mind that it was developed for humans.  Although, in the past many veterinarians would prescribe Tums for dogs, it is far less common now. Also be aware that pharmaceutical companies sometimes alter the ingredients and ratios, so just because it has worked before doesn’t mean it will continue to work in the future.

Tums is also no more useful for dogs than other antacid brands sold at pharmacies, and many people will more commonly suggest Pepto Bismol these days. If you are looking to alleviate stomach problems, Tums may work and is probably easily accessible, but there are other options.

Generally the best thing to do is let it work itself out of the system naturally.  If you believe it to be serious or the problem should persist, visit your veterinarian for a professional opinion and don’t self medicate.  Tums is for your tummy. It was made for humans and in this case probably best it stays that way.