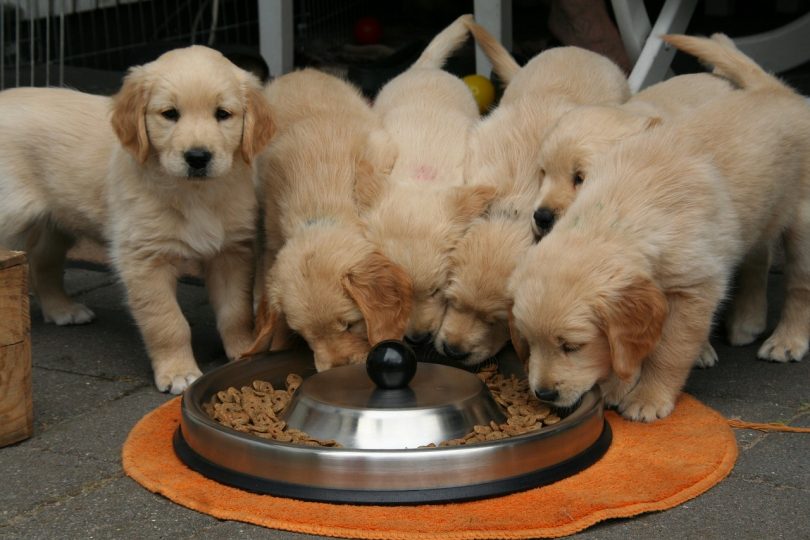 We all know how our little tail chasing friends go around our houses trying to devour pretty much anything and especially the cat’s food, if you happen the be one of those happy owners of both cats and dogs. But is that ok? Can dogs eat cat food?

Dog and cat food seem very much alike from our limited human perspective and for some reason dogs seem to love cat food, always trying to gulp down as much as they can before anybody – the cat in some cases – chases them away. But in fact, cat food is very different than dog food.

First, let’s take a look at the differences between the two, because there are quite a few, and understand why cat food, though very appealing to dogs, is not a good idea.

Unlike the other way around, a dog can live on cat food alone for quite a long while, but that’s not recommended due to several reasons.

Cats and dogs have different nutritional needs. Cats are carnivore creatures while dogs are omnivores, and this alone makes a big difference in what a specific food contains. Unlike cats who can’t synthesize certain proteins, dogs can take their nutrients both from plant and animal based food sources.

Because of that, cat food is too rich in nutrients for dogs, and while it may not be as dangerous as cats eating dog food, it’s still not healthy for your dog to eat cat food alone.

Since cats require higher levels of protein than dogs to have a healthy life, a dog eating only cat food may develop kidney problems due to the fact that the dog’s excretory system won’t be able to properly eliminate the extra protein provided by cat food, turning into urea which can then accumulate in the dog’s body.

Besides the high protein levels, cat food also contains a a higher level of calories, or fat. While in the beginning it may not seem like a problem, over a longer period of time, the dog might develop stomach troubles, like diarrhea and vomiting, or even become obese.

A dog’s system wasn’t made to digest food so fat, and combined with the extra protein intake, it will only result in health problems.

While your dog gulping down your cat’s meal every now and then won’t be a problem, you should make sure you feed him what he needs, and that’s proper dog food.