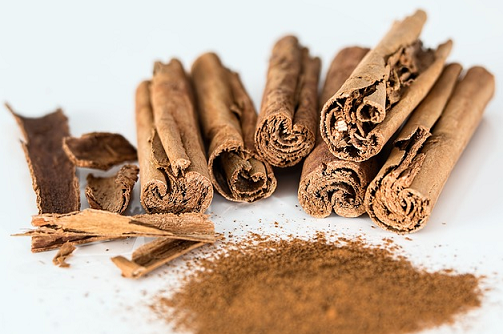 Today’s question: can dogs eat cinnamon? Is cinnamon good or bad for dogs? Scroll down for detailed answers.

In our modern society, many people have begun to lean towards a ‘foodie’ side of being.  Preferring to eat foods that are flavorful and seasoned in odd mixtures, many dog owners have begun experimenting with all new flavor combinations and types of foods.  While we may choose to enjoy foods that others may think of as being an odd combination, there may be hidden seasoning in our foods that we never would have guessed.  Many of the foods we eat have cinnamon as a side ingredient. Especially in the autumn months, cinnamon tends to be used more often to bring a sense of the season to the eater.  This is the reason why people who own dogs have started to wonder if giving them cinnamon in their foods is an appropriate thing to do.

With dog owners becoming more conscious of what their dogs eat, many may be worried if/when their dog has eaten a food containing cinnamon.  Can dogs eat cinnamon or is it just one of those ingredients that are healthy for us, humans, and extremely bad for dogs?

Can Dogs Eat Cinnamon? How Much? 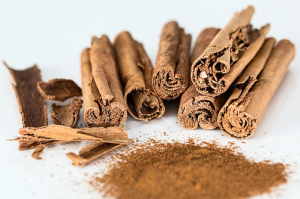 You can find cinnamon almost anywhere, from the classic cinnamon rolls to the apple sauce. Somehow, this spice seems to find its way in every restaurant or place where people can get the chance to serve a healthy meal. Are you a dog owner who likes to share food with your beloved pets? If yes, then most likely you have wondered if you could give this spice to your dog.  Does your dog like to swipe food from the counter?  You may need to be more aware of whether or not your dog eating cinnamon will pose a future health risk.

According to ASCPA, cinnamon is non-toxic to cats, dogs and horses. Cinnamon is not a big concern when it comes to dogs, although the spice should not be consumed in large amounts. A small amount of seasoning licked off a food, or sprinkled upon kibble will not do any harm to your pet.  In the event your dog has eaten a container of cinnamon, or a large amount of seasoned human food, then your dog could become sick.  If this happens, then your dog’s body will naturally get rid of the excess spice s/he consumed. Whether the pet will be throwing up or having a diarrhea, the body of your dog has a natural response to get rid of that extra amount of cinnamon.

Over consumption of cinnamon is not considered a life-threatening situation, so there is no need to be very worried.  The worst aspect of your dog ingesting too much cinnamon is the potential mess you will have to clean up later.

On the same note, if your dog has eaten some leftovers containing cinnamon, or if you placed the spice into her food, your pet should be fine. However, if your furry friend is not used to eating human food, and has had only dog food, then s/he may experience a bit of indigestion.

As with any new food or spice, the body will take time to adjust to the new ingredient.  On occasion, indigestion is the body’s way of adjusting to the ingredient.  The hardier your dog is, the more likely your dog will be to tolerate cinnamon without much side effect.   It is important to not confuse this manifestation with the potential effects of that small amount of cinnamon.

If you would like to feed some treats containing cinnamon to your pup, try to include as less cinnamon as possible in that specific treat. This is just to test the dog’s reaction, whether s/he likes or tolerates it. If your dog willingly takes a bit of a food with cinnamon, or licks a bit off your hand, you may be in luck!  Your dog will probably like cinnamon!  If s/he does not develop any diarrhea or indigestion after eating the food containing cinnamon, then you can give him/her such treats.  Be sure to only offer small amounts of cinnamon or cinnamon flavored foods, and only on rare occasions. Do not make a habit out of giving spices to your dog, or human food containing cinnamon. Offering cinnamon rolls and cinnamon donuts, for example, is unhealthy as a food to both you and your pet.  Having these cinnamon treats on special days and holidays are reserved as being safe, but offering every day is definitely off limits.

Even though your dog may tolerate cinnamon, there is absolutely no need for you to feed him/her this ingredient. It is not an essential part of the dog’s diet nor should it be.  Dogs do not season their own food or know enough on the topic of culinary tastes to prefer a bit of seasoning atop of their food.  If your dog never has a lick of cinnamon, s/he will be just fine.  Cinnamon and other seasonings will never be a recommended need for your dog.  If you choose not to offer this spice to your dog, s/he will never know the difference and you will never have to share.

Why is it that dogs do not have to have cinnamon in tier diet? Because if your dog would be out in the wild, s/he would probably have nothing to do with this food. Cinnamon does not present itself to be ingested in the wild and your dog has evolution to blame for his/her genetic makeup as a carnivore without spice preferences.

Dogs eat so they can live. They eat in order to survive, not to fill their tummies and gain unnecessary weight. Taking that into consideration, it is safe to say that s/he is not looking to savor the food. Dogs eat and chew food for survival and nourishment, not for taste and savoring each bite.  It is better to keep giving your dog the high-quality food s/he has been used to and that should do all the work.  Dog food companies take into account which tastes may be more appealing to the canine variety and incorporate the flavorings needed.  Most dogs prefer a meat taste and are simply happy to eat.  Further action is not needed.

Many of the recommendations that advise people to give cinnamon to their dogs are actually based on studies made on humans in relation to this delicious ingredient. Cinnamon is mostly used as an antioxidant which may lower blood sugar.  It is available in various supplements made for humans with chronic health conditions and diabetics.  Cinnamon can be added to a large variety of foods and enjoyed in any number of ways.  With added antioxidant properties to benefit from, those who enjoy this spice can have the simple knowledge of doing something good for their bodies.

Both dogs and humans are mammals that share the same systems and organs to keep the bodies alive. However, when it comes to food, and the manner in which it is being processed, we are completely different. For instance, a dog is mostly carnivorous, while humans are omnivorous.  While dogs and humans have a similar genetic makeup, we are not equal and should not be treated as such.  When wishing to offer your pet a new type of food that is normally for human consumption, be sure to keep this fact in mind.  Dogs are not able to digest food the same way their owners are, and cannot eat any and all foods just because they are dogs.

The acids produced by the stomach are completely different from one species to another, thus resulting in a diet that needs to be distinct for each exponent in particular. When you as a dog owner are able to tolerate a particular food, do not use this as a gauge to assess whether your dog can eat the food as well.  Cinnamon is a delicious spice to consume, but even we, humans, do not really need it daily. So, you can imagine that dogs do not really need it at all.  The spice is a nice addition to flavor a food, but not truly beneficial in a way that matters to a dog.

What Happens if My Dog Eats Large Amounts of Cinnamon

A common negative side effect from cinnamon oil and cinnamon itself is sensitization and irritation. For people who often have their skin exposed to cinnamon, you may experience sensitivity that causes irritation, blisters and redness on their hands and lips.  Those who cook and bake with the spice regularly, or work in a cinnamon factory, your skin may find the spiciness of the cinnamon to be aggravating.  If your dog seems to have opened a jar of cinnamon, and rolled in the powder, your pup may also have a bit of a skin reaction to this element.

Pets that consume human foods that contain cinnamon, eat the spice directly from the container, chew on the cinnamon tree or lick on the essential oil may experience sensitivity or irritation in the mouth. Dog’s fur may protect them from other areas. However, it takes a bigger amount (more than 1 tsp of cinnamon powder) of cinnamon to cause these problems. However, a small amount of essential oil or large doses of powder can lead to liver disease, vomiting, diarrhea, changes in heart rate and low blood sugar. When the spice is directly inhaled, it can lead to lung irritation, breathing difficulties, coughing and chocking.

If your pet has inhaled cinnamon, eaten essential oil, or large quantities of cinnamon, please take your dog to the vet immediately.  Small amounts of cinnamon are deemed safe as a treat, but instances where your dog has taken the amount of cinnamon ingested into his/her own paws, this is the cause for concern and need for medical attention to rule out any potential hazards.

The food you feed to your dog should have all the nutrients s/he will need on a daily basis. You can change and experiment with different dog foods if the food does not meet the expectations, but make sure to perform this switch gradually

Your dog can eat cinnamon, but dog food is even better than this spice. Why? Because specially formulated dog food is being tailored to fit the exact needs of your dog, but to also be digested properly. A great food for your dog will always contain ingredients that are easy to be broken down.