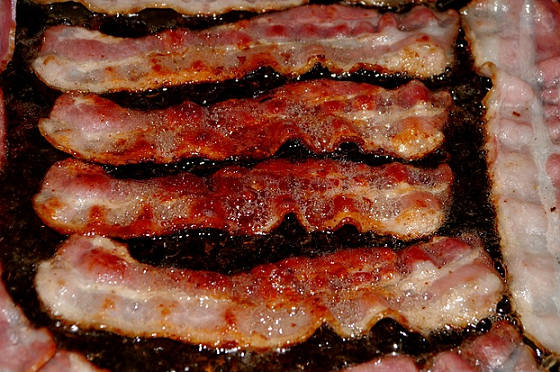 Today’s question: can dogs eat bacon? Is bacon good or bad for dogs? Scroll down for detailed answers.

Bacon is an all American food that has become increasingly popular over the past few years.  Bacon is not just popular as a food, but as a decoration, artwork, and even duct tape.  Pictures of bacon are everywhere!  Along with pictures of bacon, we have the scent of bacon in special made candles and scratch and sniff stickers.

With everyone loving bacon, we all seem to be craving the taste and smell of bacon everywhere we go.  We love the smell of this fatty pork product, and so do our dogs!  Dogs are meat eaters, and take no issue with eating pork.  Can dogs eat bacon? This question must have crossed your mind while enjoying a crunchy slice of flavorful bacon for breakfast. Your furry pet was glaring at you with that unique, classic puppy-eyes look every dog owner is acquainted with, and made it really hard to resist not giving it a tiny portion of it.

Nonetheless, as tragic as it would seem to deny your canine buddy such a tasty treat, bacon is not recommended for dogs, as it may eventually lead to a range of health-related problems. This article provides you with all the information you need to know with regard to this dietary aspect. 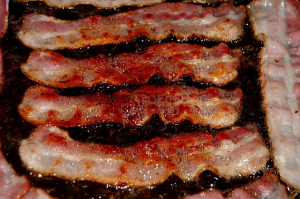 Can Dogs Eat Bacon? Why Not?

Bacon is not recommended for dogs.

A healthy diet equals a long and happy life. This principle applies to both humans and pets. You want your fuzzy pup to be around for a couple of years, don’t you? Of course you do – his/her presence literally brightens up your day.  Keeping your pup alive and healthy is as important to him/her as it is to you.  As the dog owner, you are in charge of the diet of your dog.  You cannot let your dog dictate what food you feed, or else your dog would subsist solely on junk food.  A poor diet is an important for your dog to avoid as it is for to avoid.

The reason why you should resist the pup’s stubborn begging when it comes to bacon is that as tempting as the aroma it releases may be to his taste, bacon is really harmful for the pet’s overall health. The smell may be intoxicating, and lead to cravings for a meat eater, but your dog should simply enjoy the smell and not the meat in this case.  Thus, it is not advisable to feed bacon to your pet, not even in rare occasions.

The high levels of fat will imminently trigger the appearance of stomach inflammation, unhealthy weight gain, pancreatitis and other health problems.  Dogs can easily develop health problems from junk food just as their owners can. Dogs may develop an issue faster than their owner because dogs do not have the digestive system that humans do and cannot process the human food offered.  Greasy, fatty foods seriously disrupt the digestive system of your dog and are never recommended.  If you have any doubt on feeding bacon to your dog, speaking with your vet on this topic should be enlightening.

The Risk of Pancreatitis

A poor diet often leads to the appearance of pancreatitis. The presence of greasy ingredients, including bacon, in your pup’s diet can significantly raise the risks of pancreatitis. Most of the times, this disease may not be noticed in its early stage, the symptoms accompanying it appear only later on.  Whether in the early stages, or the later stages, pancreatitis will only develop into further health issues and damage to yoru dogs internal workings.

Bacon does not have much nutritional value.  The fatty meat of bacon is not recommended to be used as a food source given the fat and sodium content.  The high levels of salt and excessive fat make bacon such a dangerous ingredient to your pet’s pancreas. Once your dog’s pancreas is affected, it will no longer function properly.

This disease affects all breeds and sizes of dogs. However, smaller breeds such as Cocker Spaniels, Terrier pups and Poodles are more prone to suffering from this condition. Dogs that are smaller in stature have smaller digestive systems that are unable to process the fat and sodium contents.   Nonetheless, there are cases where even larger breeds such as German Shepherds or Golden Retrievers might end up experiencing this harmful condition.   Bigger dogs may have stronger digestive systems, but any size dog is not meant to eat this type of food.

The Warning Signs of Pancreatitis

As soon as you notice any of these symptoms settling in, it is recommended to schedule a visit to the vet in order to establish what is wrong with your pup.  You must watch your dog closely to ensure they are not suffering even as the bacon passes through their system.  If the bacon has passed through, and your dog still looks to be in pain, or with a swollen stomach, you may not wish to wait until your scheduled veterinarian appointment, and take your dog to emergency to be checked out.

A diet high in fat will inevitably lead to an excess amount of unwanted weight. As bacon is one of the ingredients which are loaded with fat and a lot of calories, you should not feed it to your greedy, begging pup. Weight gain is often triggered by a lack of exercise combined with an unhealthy diet.  Even if your dog is active, the fat and sodium in bacon will remain in his/her system long after their run.  Maintaining a healthy diet is important, no matter how much exercise your dog enjoys.

Bear in mind that an overweight pet does not equal a healthy pet. As much as your pup enjoys eating, it is your job to stay strong and not give in by always offering it all sorts of treats just because he is begging you to do so. Your pet’s health is at stake!  Rather than give in and offer unhealthy treats such as bacon, you may offer your pet bacon scented treats especially created for dogs.  Bacon treats created for dogs are a healthier alternative to bacon meant for humans since the treats will be without the fat, calories, and salt that derives from pork.

Preventing weight gain is your dog is very important for a variety of reasons.  Outside of vanity and overall comfort, maintaining a healthy weight will ensure a stronger immune system and lower the risk of developing disease.  A surplus of weight may lead to bone issues, hypothyroidism and other health conditions. In order to check if your dog’s weight is ideal for his/her age and breed, you should always be able to feel the ribs while slightly petting it.  Taking your dog into the vet regularly for checkups with also keep their weight in check and helps guide you towards the proper feeding of your dog.  During these visits you may ask your doctor for their opinion on bacon, as well as healthier alternatives.

Another side effect that bacon incorporates is the high sodium intake. High sodium intake may lead to a problematic high level of blood sugar, as well as an excess of thirst. Moreover, sodium nitrate might also lead to the appearance of chronic pulmonary disease.  Dogs develop diabetes and high blood pressure akin to that of their owners.  These diseases may be avoided-simply by keeping an eye on your dog’s diet.  Bacon can lead to weight gain, pancreatitis, high blood pressure and even diabetes from the increased blood sugar content.  Avoid these potentially deadly issues by simply not offering your dog bacon.

Bacon grease is considered to be utterly harmful for your dog’s health. As a matter of fact, the excess of calories that come with the grease is what makes bacon such an unhealthy ingredient for your fuzzy pet. It may imminently trigger the appearance of heart diseases.

Additionally, it might also lead to the clogged arteries.  Bacon grease may be soaked up through a paper towel or napkin, but greasy residue remains upon the pork and will essentially poison the blood of your dog.  Greasy food damages blood, circulation, and the hearts of dogs.  Despite your intention of soaking up the grease, the bacon will still have a damaging effect on the heart of your dog.

Raw bacon is also not a viable dietary option if you wish to provide the pet with a healthy diet. Raw bacon might be bad for your pet because it may lead to the occurrence of diarrhea and intestinal problems.  Raw bacon may encompass parasites and bacteria which are evidently harmful for your furry friend. Raw meat, whether bacon, hamburger, or steak, haves a plentitude of bacteria to avoid.

Dogs are known to eat raw meat in the wild and not suffer sickness; however, domesticated dogs do not have the digestive system to tolerate this type of food.  Cooking the bacon to the directed temperature is needed to prevent food poisoning.  Furthermore, the process of preparing the bacon involves the addition of a wide range of artificial chemicals and aromas which may lead to the occurrence of kidney, liver, and heart damage.

In conclusion, do not ever give your dog bacon.  Even just one piece of bacon may set off a series of health complications.  Dogs may also like the taste of bacon so much that they avoid their kibble and the staples of a healthy diet.  Raw food should also be avoided.  There are healthy alternatives to give your pet if your feel the need to supplement his/her diet, and the vet you trust should be the first person contacted with questions