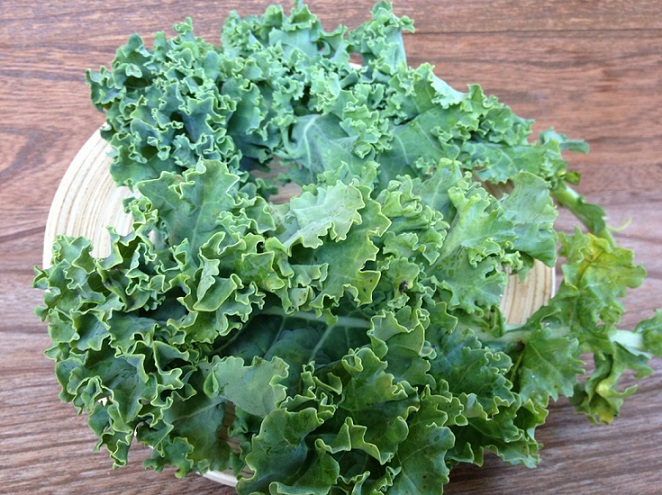 Today’s question: can dogs eat kale? Is kale good or bad for dogs? Scroll down for detailed answers.

There has been a lot of media hype surrounding kale in recent years.  The new super food, part of Hollywood diets and considered one of the best things people can eat.  Kale can be grown at home or a farm, bought at the store of from a farmer, and is generally well received everywhere you go.  Kale can be added to foods, eaten on its own, blended in a smoothie, or chopped and topped on a meal.  Kale is so versatile that many believers use kale daily and sing the praises of the benefits. Many pet lovers wonder: can dogs eat kale?

Is kale a fad, or is the leafy bunch here to stay?  Unfortunately we do not have the answer to that question, but we can talk about whether dogs can eat kale!   Dogs eat most anything, but often stray away from leafy greens and salads.  Since kale is a leafy green, your dog may not find the leaf appealing.  Fear not! The kale can be chopped or blended and put atop dog food.  Kale may also be baked in to a kale chips-very much resembling a potato chip.  Most dogs enjoy chips and the crunchy texture; therefore, a hesitant dog may be more inclined to eat his/her greens if the kale comes in a baked chip format.

Kale is a vegetable, grown from seeds, and looks somewhat similar to wild cabbage. It is a member of the cruciferous family, which also contains cauliflower, cabbage and broccoli.  Kale was actually a common green vegetable in Europe in the middle ages.  It comes in a number of different varieties, based on the size of the stem and shape of the leaf.

Kale’s popularity growth is based on the nutritional value the food contains.  For humans, 20% or more of their recommended daily intake of a wide range of vitamins and minerals is contained within kale leaves. So if it is generally considered a great idea for humans to be eating it, what about our four-legged canine companions? Will it do them as much good? Will it do them harm?

Yes, dogs can eat kale if you can actually get your pooch to eat it.

Whether a dog can eat kale is a question generally assumed that kale is fine for dogs within certain parameters.  Kale will do a dog some good, but only if and when you are able to get the dog to actually eat it!  Like young children and green vegetables, actually getting the leaves into their mouths and down their throats, into their systems is the real problem.  Yes, kale can be eaten by dogs, but no, some dogs will not eat kale.  Kale can only be eaten by dogs—if the dog actually eats the leaf.

While getting your dog to eat the leafy super food can be a problem, the actual leaf itself is incredibly easy to cook, prepare, and make use of.  Giving your dog the leaf may not prove to offer a result, but carefully arranging the leaf within the food your dog already eats will solve this problem fairly well.

Just as other members of cruciferous family (cauliflower, cabbage and broccoli) kale can be blended into foods and the taster is none the wiser.  A blended batch of kale can easily be put into the moist food of your dog and s/he will benefit from the extra nutrients kale offers.  Kale can also be very finely chopped and added to kibble or perhaps mixed with some eggs and then put into kibble.  Parents of children have to hide veggies into their children’s food on occasion; the same is true for parents of pups.  Hiding the vegetables is easy when you know how to do it!

Kale is deemed safe to eat by humans and animals alike, provided the food goes into the mouth. However, other research still in the beginning stages suggests that the garden may not be as rosy (or kale filled) as first assumed.  Kale may be tolerated by most people and pets, but there are always risks involved when introducing new foods.  Depending upon breed, size, and general disposition, one dog may tolerate kale well, while another dog has negative reactions.

Kale really does pack an unbelievable punch of vitamins, minerals and antioxidants.  In many meat based diets that dogs enjoy, there is a lack of many of minerals that are found in abundance in kale, so it can really add value as an addition to the diet.  Dogs are instinctually attracted to eating meat and consuming protein as their main source of dietary nourishment.  There are other dogs that may require a bit more nutrition than meat only diets consist of.  In this instance, adding leafy greens to the diet may help aid in treating ailments and preventing disease in a natural method.

Kale contains indole-3-carbinol, which has noted benefits in fighting cancer.  Kale helps to support the heart and cardiovascular system and is believed a good way to help cleanse and detox the body.  Any type of dietary aid that triggers digestive health is good for a dog.  Dogs have a similar need for digestion functions as humans, but dogs need a bit of help to keep their digestive system running smoothly.  An active digestive system will also help to purge the body of toxins while boosting the immune system.  Simply adding kale to the diet of your dog can keep him/her healthier longer, with fewer visits to the vet.

Firstly, it is important to recognize the differences between human digestion and canine digestion.  Humans are actually better designed to operate as herbivores.  The large and small intestines provide a huge surface area for green leaf plants to be fully digested and for us to absorb all the goodness they provide.  A dog is slightly different.  They are better designed for meat.  Their digestive system is not as complex, which means that often green vegetables don’t have the same opportunity to get broken down and the vitamins and minerals absorbed into the blood, before being expelled.

It has been suggested that kale and other members of the cruciferous family, may actually act as ‘hyperaccumulators’, meaning an unnecessary and unsafe build up of thallium and other toxins. If the kale is not expelled from the system, the nutrients within the leaf can build up within the digestive system and create more problems than solutions.  With meat passing through dogs faster than leafy greens, the digestive aid offered through kale may not be needed for dogs that do not suffer from tummy troubles.

In large quantities it is thought that kale can also start to lower thyroid levels. This is because Kale contains goitrogenic properties.  Cooking or a light steaming can minimize this.  Cooking and steaming kale remove a portion of the nutrients and minerals, and the longer the leaf is exposed to heat, the less nutrients the leaf will offer.  In effect, this may be good because too much of the nutrients will lead to overexposure and its side effects.

Kale is also believed to perhaps cause kidney and bladder stones in dogs.  This may be the result of too much of the kale nutrients being built up within the dog’s body rather than being expelled.  So, if your dog does not necessarily have a need for the cruciferous veggie in his/her diet, you may want to only offer kale sparingly-if at all.

Oscar Wilde once said, “Everything in moderation, including moderation.”  A great quote to be enjoyed but in the case of dogs and kale, it is best to just go with the first half and leave the second half for an amusing quip.  Moderate use of kale is fine and will likely do your dog some good.

By growing your own kale, or buying organically grown kale, you reduce the risk of thallium contamination or any other artificial chemicals kale may come into. In the event your dog has been overexposed to kale, it is also possible, through cilantro and chlorella, to get the thallium out of a dog’s body after ingestion.

Some experts believe that if a dog was given a vegetable heavy diet, consisting mainly of kale, it would still take several months for the thallium build up to be of any serious consequence.  This belief can be your assurance that offering your dog occasional bites of your kale, or sprinkling a bit on the food and offering kale chips on a Saturday night, will not forever alter the makeup of your dog’s digestive system and lead to poisoning.

With all of the information out there, and all of the vague trends, it is difficult to wrap up Kale in a nice concise sentence. It is better to try and give objective facts and let dog owners decide for themselves, or in consultation with veterinarians.  Firstly, Kale itself is not toxic to dogs. Kale is not toxic to eat, just tricky to feed.  Kale is not toxic to eat, but can lead to toxins built up in the body if overexposed.  Listening to your intuition and following the moderation guidelines will free your pup from any potential harm.

Dogs would not naturally eat kale in the wild, but neither would you. But, remember we are not built the same and have very different dietary requirements.  Dogs prefer meat and need the carnivorous diet.  Humans may be opposite in nutritional needs but that does not mean we cannot share a large grey area of food choice with our dogs.

Kale does have many great properties, and while they will not be as easily broken down and absorbed by dogs, they can gain some benefits. However, too much kale can also lead to its own set of problems including the buildup of the toxin thallium in the body, as well as the lowering of health thyroid levels. Every now and then, offering kale is fine and should be enjoyed without worry.