My dog is 6 years old and has shared the house with the occasional foster dog. Introducing your dog to a new cat is different compared to ‘dog with dog’, this was new to me. I thought it was a safe idea bringing in this 5 month stray kitten into our home, how wrong I was!

My dog never fluttered his eye lids at cats when out walking, so I assumed he was very accepting of them. Furthermore, my dog is naturally calm and very chilled, so cats never felt threatened to make a quick exit.

Steps introducing your dog to a new cat

I’m glad I put this sweet little kitten in a breathable bag before entering my home. My dog was naturally curious and that’s okay, but he was licking his lips and begging like he’d never been fed before.

I kept my new fluff ball in the bag for a little while because I felt he was scared. Eventually though, I resumed to the lounge and gave him to my daughter. I left my dog outside for obvious reasons.

It was during those few moments that we decided to name him Sox. His name choice wasn’t difficult because he’s black with white paws. I have to be honest; I was totally captivated by this kitten’s beauty and ‘oh dear’ I became maternal once again. I am nearly 50, so this was a weird feeling, but then my girls were going goo goo as well. My strapping 17-year-old son popped in to see what all the excitement was all about, and he also went goo goo!

I brought my dog into the lounge after half hour; to say the least, it was quite a shock when my dog wanted to eat the dear fluff ball. Of course, Sox wasn’t going to be Kaba’s dinner, so he had to be escort out of the lounge temporally.

Initial steps to introducing your dog to a new cat

Dog and cat together on white background. Wide angle picture.

When a dog has lived solo for some time, they become territorial. So introducing your dog to a new cat has to be done very slowly. Your dog will likely feel your new cat is another intruder or an easy meal.

It took about one week of intense supervision before being able to relax. Whatever room I and Sox were in; his litter tray, water and food had to follow.

Final steps to introducing your dog to a new cat 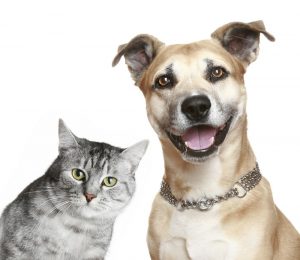 Once the above steps were very comfortable for Kaba and Sox, I ventured further into introducing each other. Please remember every cat and dog is different. Just because it took me one week, it may take you weeks or months.

I still keep Sox’s litter away from Kaba due to the fact he started eating Sox’s feces, and I always feed Sox separate from Kaba.

Sox thinks Kaba’s tail and ears are fun to play with and Kaba now thinks Sox is his puppy. Oh bless, we’re all maternal now including Kaba!