OCD in dogs is more common than dog owners realise, research has recently discovered that OCD in a dog is no different to obsessive compulsive disorder in a human. It is understood that both humans and dogs dominate the same comparable brain OCD irregularities. This recent ground breaking study provides insight to better treatments for dogs and humans. the good news is, dogs are responding to the same medications that humans take so there is hope for us as well as our dogs!

OCD is also known as obsessive compulsive disorder, but the term ‘OCD’ is more widely used, known and accepted. Dogs with OCD express the same compulsive behaviors as humans; however, there are some slight variations in temperament since a dog is not human. For example, humans may wash their hands compulsively for an hour or more until they feel satisfied, whereas a dog may chase his tail constantly.

Symptoms of OCD in dogs

OCD in dogs and humans can be destructive, have alarmingly repetitious mannerisms and have serious health problems. OCD develops into a clinical problematic issue when mannerisms become purposely ritualistic and having no control over their compulsion.

Symptoms of OCD in dogs include but are not limited to are the following:

Here are some related articles dogs can often suffer from when they have obsessive compulsive disorder:

It is important to recognize that all dogs engage in these types of behaviors. However, it becomes abnormal when their conduct becomes overly repeated and uncontrollable.

Diagnosing and treating OCD in dogs

It is believed that the Doberman breed is mostly at risk of developing obsessive compulsive disorder. Studies that have compared human and Doberman MRI images, confirm higher brain matter volumes and lower brain matter density. Additionally, there is a part of the brain that is responsible for our emotions; this is called the corpus callosum; it shows indifference’s compared to ‘normal’ brains. People who suffer from chronic depression also have these indifference’s within their corpus callosum. 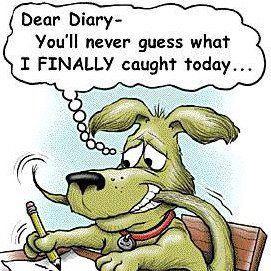 If you believe your dog is suffering from  obsessive compulsive disorder, I suggest you take your dog to your veterinarian for a consultation. OCD in dogs is not an easy diagnosis, but it can be diagnosed and treated to help alleviate and calm the condition. Depending upon how qualified your veterinarian is, the following measures should be undertaken.

For a veterinarian to diagnose OCD in dogs, they will often have to rule out other illnesses first. Usually a process of elimination will have to be made; the vet will ask lots of questions about your dog’s history, attitude and his environment. Physical assessments and examinations will have to made, this will include taking a blood and urine sample. The examinations will determine if there are infections, diseases, organ failures, internal or external parasites and/or any other dysfunctions.

The next process of elimination is videotaping your dog’s compulsive behaviors. This procedure will generate an accurate diagnosis in identifying obsessive compulsive disorder. Determining if your dog has OCD is a long process, but the results will be worth your long-suffering and patience.

These drugs are called tricyclic antidepressants or selective serotonin re-uptake inhibitors. Whichever drug your vet prescribes, it is important to use as recommended as there can be adverse side effects and drug interactions.