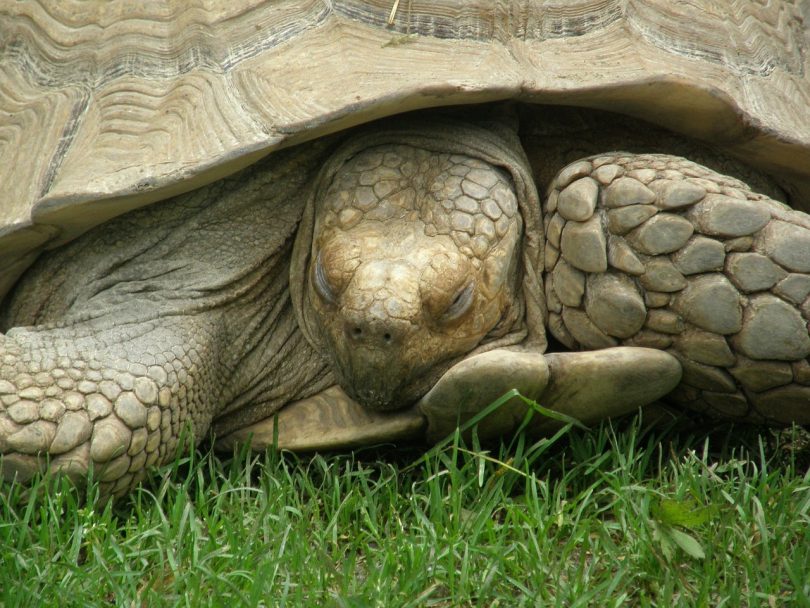 We do know that every little living creature needs to sleep, but for some, sleep means something completely different from what we humans experience. We’ve seen dogs and cats sleeping, but what about turtles? How do turtles sleep?
To many people’s surprise, a turtle’s sleep needs and patterns resemble that of humans, with differences depending on the species of turtle we’re talking about.

How Do Turtles Sleep

Most tortoise are active by day – they are diurnal creatures so they go out looking for food and mates – and sleep during the night. Depending on the species, their sleep pattern might be differently developed due to their distinctive living environment.
For example, the desert tortoise found in the southwest of the US, or the box turtle species, hibernate during winter months and comes out in the sun only when the temperature is high enough for them.

All turtles are known to close their eyes when they sleep. Most of them will hide away in their shell for protection, and depending on where they live, they might hide in between rocks or under rocks and corals when underwater and even on the bottom of small ponds where they are protected by most predators.
If you’re wondering how they can sleep underwater, we’re talking here of species like the sea turtles, which as the name implies, they live most of their lives far out in seas and oceans. They only need a few seconds at the surface to refill their lungs with enough oxygen and then they can last even up to several hours underwater.
During the sleep phases, their metabolism slows down so much that it allows for a better and more efficient use of the oxygen stored in their lungs, which stretches their sleep time underwater to a good several hours.
One interesting thing is that if they’re far away on the ocean, they can even sleep floating around on the surface of the water, as they have no predators around.
Some freshwater turtles can also absorb oxygen from the water, so they can spend even a few months down below the surface of the water. To sleep, they usually bury themselves in mud, sand or debris under the water, at the bottom of shallow ponds.

Most turtles are active during daytime, and sleep during the night tucked away in their preferred corner of their environment, where no predator can reach them. Most of their daily activity includes food foraging, mate searching, basking in the sun or floating gently near the surface.
Sometimes, some aquatic species of turtles doze off as well during daytime while basking in the sun, but that only when the environment is safe enough.