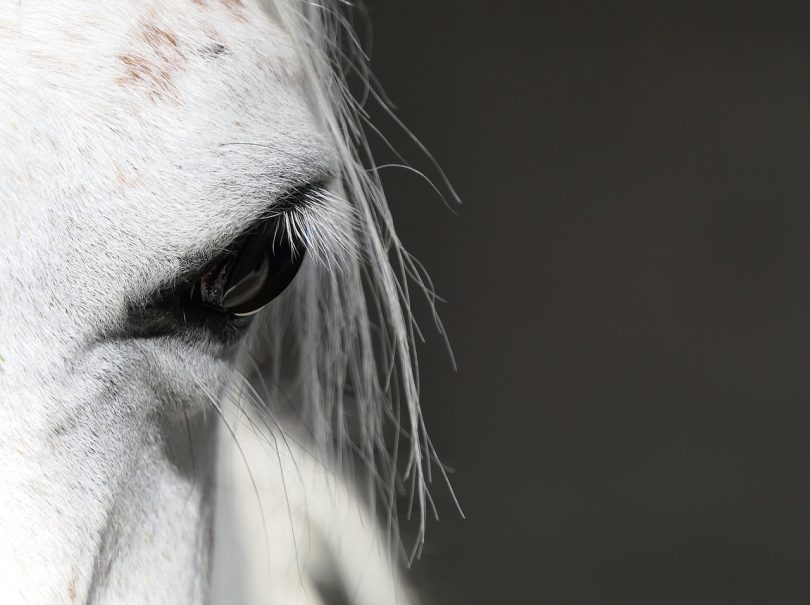 With more and more people taking equitation lessons and becoming horse owners, it started to be very important to learn about the animals they’re taking care of. While we do get to know a lot about a horse’s performances, there’s little known about their senses. Have you ever wondered how do horses see what’s around them?

Eyesight is one of the most important senses we and most animals have, but that doesn’t mean we all see the world in the same manner. The behavior of a horse is related to his eyesight, so one must take that into consideration when doing horse training, as a better understanding of the animal will lead to better overall results.

How Do Horses See

The eye of a horse is one of the largest eye a land mammal has but that doesn’t mean they’re also the best at seeing things in any conditions as there are several abilities to take into consideration.

One of the most important parts of vision is the field of view. As you’ve noticed, the eyes of a horse are placed on the sides of their head, which leads to a 200 degree field of view for the animal. That makes horses have a very good peripheral vision compared to us humans, and they can see a little bit behind as well.

Despite all that, they still have some blind spots below the nose, above their head and directly behind them.

Depth perception is the ability that allows an animal to judge distances, and since horses are prey animals which get to run at high speeds, that’s an important skill to have. And it seems that horses do have excellent depth perception and they can appreciate very well both distance and height.

The depth perception of horses is comparable to that of cats, but they seem to have trouble in telling two objects apart if the objects are close together. For example, we could tell that the objects are separate, but the horse will see them like one big singular thing.

When it comes to how do horses see color, the matter is a little bit complicated, as it’s hard to test any assumption regarding color vision.

While some scientists believe that horses see no color at all, others are of a different opinion, stating that horses can somewhat distinguish blue or red from gray with ease but it’s harder for them to differentiate between green and yellow.

While the night vision in horses doesn’t get close to that of cats for example, they still see better in dark than we humans can. On the other side though, they take longer for their eyes to adapt to changing light conditions, which makes them prone to fear and anxiety when moving them from somewhere light to pitch black, so do have that in mind when moving your horse around.