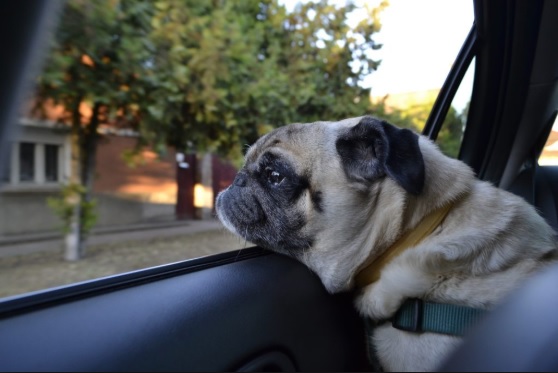 Dramamine is a medication that falls under the category of antihistamines. The main ingredient in Dramamine is dimenhydrinate. Despite being designed for humans, there are instances of Dramamine being prescribed for dogs.

It should be noted that Dramamine has not received FDA approval for dogs. Nevertheless, there are vets that will prescribe the medication to canines as an over-the-counter treatment. Dramamine is mainly used to curb nausea and vomiting associated with motion sickness. In certain instances, the medication may also be prescribed to dogs that have vomiting or nausea that is not caused by motion sickness.

Motion sickness can disrupt this balance and stimulate the vomiting reflex through histamine receptors also known as H-1 receptors in the brain. When this happens, dogs are more likely to feel nauseous or actually begin to vomit.

As mentioned, Dramamine is an antihistamine. Therefore, its main function is to bind with the H-1 receptors in the brain. When this binding occurs, the H-1 receptors are unable to take part in any other chemical reactions. In turn, dogs are less likely to experience vomiting or nausea.

Dramamine has been designed for human use and as such, all dosage instructions are meant for humans. The most commonly available strength for the medication is 50mg. It is imperative that you speak with a vet before giving your dog Dramamine. He or she will be able to provide an accurate dosage for your dog, depending on a number of factors.

Nevertheless, there are certain guidelines that you can follow when administering Dramamine to dogs. In most instances, the dosage is calculated according to the weight of the canines. The guidelines are as follows:

Dramamine should be administered between 30 and 60 minutes prior to placing the dog in a vehicle.

As with any medication, there is always the possibility of side effects. These are the most common adverse symptoms to make note of in your dog:

It is possible for dogs to overdose on Dramamine. Due to this, you should always adhere to the dosage schedule provided to you by the vet. It is also important to keep this medication out of the reach of dogs at all times.

Some of the symptoms of a Dramamine overdose include:

If you observe any of these symptoms, you should call animal emergency services immediately.

Dramamine should not be given to canines with the following conditions:

It is important to disclose to the vet any medical conditions, allergies, or limitations that your dog may have previously been diagnosed with.

Adverse Reactions with Other Medications

Dramamine has been found to have a number of negative interactions with certain medications, supplements, and ingredients. These include but are not limited to:

You should always inform your vet of any medications, supplements, or natural treatments that your dog may be undergoing.

There are several versions of Dramamine available. It is best to adhere to the Standard version or another type recommended to you by your vet.

Always administer Dramamine prior to the onset of nausea or vomiting. If your dog is vomiting, do not attempt to give the medication. Doing so then will greatly reduce the efficacy of Dramamine.

When dispensing Dramamine, you should never give your dog more than the recommended dose. You should also avoid combining two doses together if you have skipped one.

After administering Dramamine, make sure to monitor your dog for signs of an allergic or adverse reaction. Should this occur, seek medical attention at the nearest animal clinic.