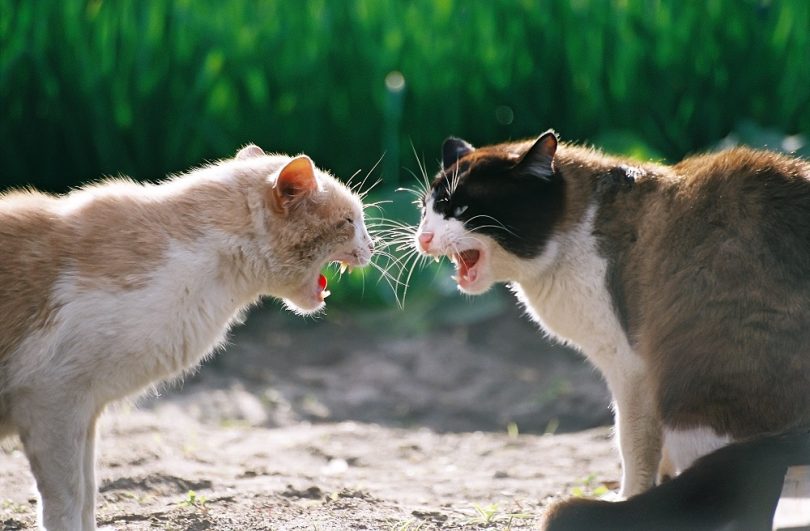 Seeing cats fighting isn’t uncommon, for one they are extremely territorial which instinctively makes them protective over whatever they’re trying to protect. Sometimes it appears cats fight over nothing and let’s face it some cats are worse than others.

Here is one example: my next door neighbors cat constantly tries to claim our garden grounds as his own, this alone creates a instant flight with my cat.

How Do We Handle Cats Fighting?

Here, I’m going to attempt to show you some great suggestions on how to deal with and end cat fights…

Tip 1. I suggest firstly, you refrain from striking the cats with your hands. This is human natural instinct, but actually this could make the scenario a whole lot worse and you yourself could end up being attacked. They may redirect their anger directly onto you and of course this could turn nasty.

Tip 2. One of the simplest ways to break up cats fighting is to use a water hose. Since the majority of cats hate water, then the very noise of water gushing out of the hose should break up the flight. But, if that fails then aim the water directly towards their body or lastly their nostrils.

Tip 3. Not everyone has a hose handy, but most cat owners own a broom. Use a long handled broom otherwise you may get scratched and hurt, aim the brush end between the cats to put a stop to the cats fighting.

Tip 4. If you don’t own a hose or a broom, then you could use a device that creates some sort of noise. An air horn is a good device or if your feeling spend thrifty then the Pet Corrector is also handy to leave lying around the house for those intense occasions.

Tip 5. Though maybe not handy everyone owns a cup and water; if you’re quick enough to grab a plastic cup and fill it up with water, then quickly end the fight by appropriately throwing some water into their faces.

Tip 6. If the cats are in frozen position but have made zero contact, then quickly slide a newspaper or something similar between them; this blocks their vision from each other.

Never pick up a cat when they’re fighting or are about to fight, this could instigate an aggressive attack and you could get very hurt in the process.

Tip 7. Some fights aren’t too aggressive thus it is possible to give an almighty hand clapping sound. Often, this is enough to scare off the perpetrator and of course it is the quickest and cheapest method. I use this method for both cats and dogs instinctively, but use the above options if this fails for whatever reason.

When cats get into aggressive flights they can incur abscesses quite easily, which can pose serious health risks and of course are very expensive to treat. If you suspect your cat has an abscess, then I suggest you immediately take your cat to the vet who will more than likely prescribe some antibiotics.

When cats have been bitten, they can become infected with feline immunodeficiency virus (FIV), but only if the perpetrating cat is carrying the virus. This is a very serious issue thus never delay getting your cat checked out by your vet.