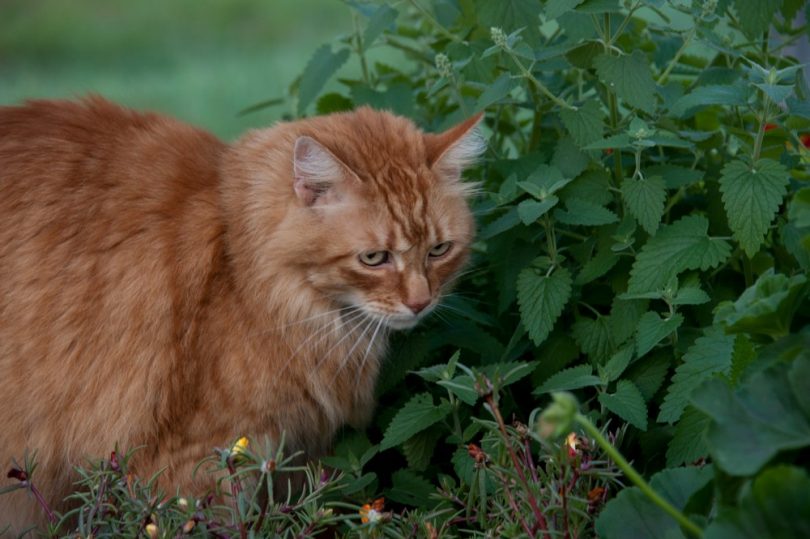 Catnip is quite an amazing herb that makes cats perform some really funny actions such as rolling, twisting, rubbing or clawing the leaves. Here are some catnip facts that every cat owner should know about.

Catnip is also known as Catmint and its latin name is Nepeta cataria. A member of the mint family, it is frequently found in Europe, the Middle East and central Asia after which it was brought to New Zealand and North America.

The plant has a size of up to 40 inches and the leaves are shaped like triangles with scalloped edges. The best way to identify it is through the smell which is quite characteristic and the effect it has on cats is due to the nepetalactone essential oil, – a feline attractant.

Aside from domestic cats, leopards, cougars or lynxes also react strongly to this smell and even tigers or lions might be affected. Apparently around 33% of cats won’t be affected by the plant and this behavior is hereditary. It is also not the only plant to have this effect because valerian and other plants containing actinidine will have similar results.

The main purpose of the plant for domestic cats is recreational since they love it so much and if you leave them in the presence of the plant they will probably start rubbing on the plant, lick it or chew it. Be careful because consuming too much of the plant might lead to drooling, sleepiness, anxiety or even stronger reactions such as growling, biting or scratching the hand holding it.

The effect of the plant usually lasts for around ten to fifteen minutes and only cats of over three to six months will react to the catnip. Due to the reactions it creates many use them in toys or to stimulate behaviors that they desire in their pets, so try them out for training.

Another great use for this plant is to have it around as an ornamental houseplant that your cat will enjoy. Some cats get crazy around it and start chewing it, so if this is the case you might not want it as handy or a mess will sooner or later occur.

The relaxing effect it has will improve the health of the cat and there are several other plants that you can try as well since they will have health benefits for the pet.

The thing that most people don’t know about this plant is that when brewed into a tea it will calm you as well and it will keep unwanted insects away while attracting butterflies!