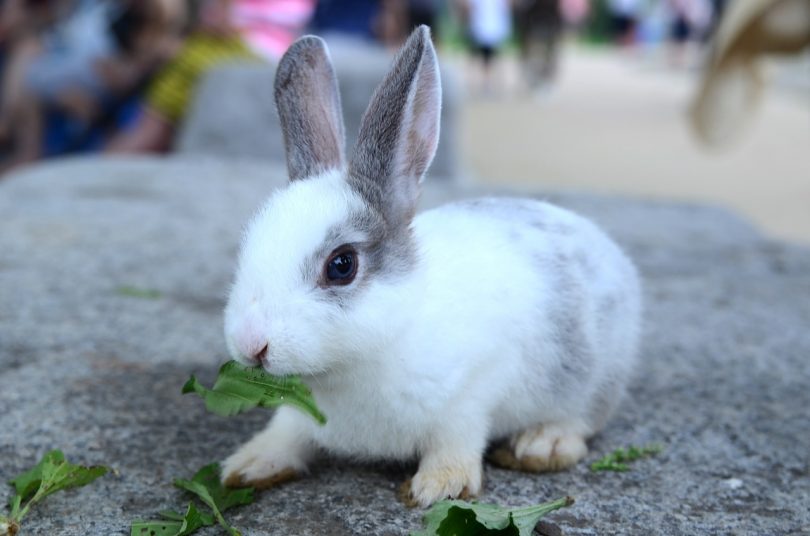 One thing we all know for sure about rabbits is that they can hop around all day long without the slightest care in the world. But can rabbits swim? This is one of the curiosities many rabbit owners have about their fluffy little friends.

The simple and straightforward answer is yes, rabbits can swim. That is, they have the ability to swim, but that doesn’t mean that they like it. There’s a long way from ability to enjoyment. If we sparked your curiosity, let’s delve deeper into this matter.

Technically speaking, yes, rabbits can swim, using their fore and hind legs to propel themselves through the water, but they will do that without much speed or efficiency. Most rabbits will only swim for survival, as when they need to avoid some danger like a predator chasing them. So, no, your fluffy little friend will not go for a swim just for fun and forcing him is not a good idea either.

All rabbits are capable of basic swimming, but some are more capable than others. For example, the swamp rabbit has evolved and adapted to live in marshes, wetlands and other wet habitats and is found in the southern United States.

Besides their ability to swim to escape danger, they can even ‘freeze’ in the water to camouflage themselves, with only their nose sticking out. For that, they usually choose an area in the water where they’re surrounded by scrubs or other plants and debris to serve as their camouflage.

The Dangers of Forcing a Rabbit Swim

Just because a rabbit has the ability to swim, it doesn’t mean they love to do that. As we mentioned earlier, most rabbits will only go for a swim when pushed by a greater danger and their survival instinct.

Otherwise, a rabbit will avoid water if possible, so forcing him to take a bath in your backyard’s swimming pool only for amusement is not a great idea, as there are other complications that might arise.

First, a rabbit’s skin and coat will soak with water, technically transforming them into a big sponge. Besides, their coat will dry very hard and that poses some other problems to a rabbit’s skin, making it vulnerable to tearing, crusting or redness apart from the simple discomfort.

What’s more, a rabbit that is forced to go into the water might get shocked, as he or she wasn’t ‘naturally’ forced to do that. A shock like that could cause injuries to their nervous system, with extreme cases leading to heart attacks. Most of the times, rabbits avoid being wet and cold, so you can imagine that dropping them in the middle of a pool, no matter how small, can cause a great shock for them.

So the conclusion here would be that your little fluffy friend can definitely swim when dictated by his survival instinct, but that it’s not a good idea to make him swim yourself for amusement.