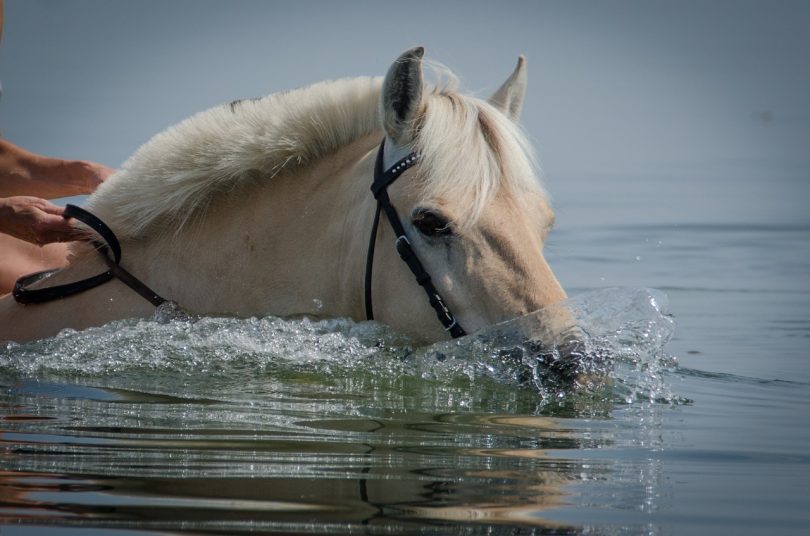 Most of us are used to seeing a horse racing over a lush green field or on a race track during a competition, but can horses swim? Swimming doesn’t seem to be part of a horse’s daily activities, especially if you look at the constitution of this animal.

Contrary to what many would believe, horses do have the ability to swim, as most of the other animals out there. This ability comes natural, so they don’t need to be taught how to swim. But at the same time, some horses might not be confident enough to go swimming if the situation doesn’t require it, like the case would be in life threatening circumstances.

How Do Horses Swim

At first and if they’re not used with the water, most horses will tend to panic for a while when submerged and they’ll try to porpoise. After a couple of minutes, they will become more and more comfortable and will establish themselves a stable pace.

The way most horses will use their limbs underwater is similar with a land trotting or pacing in an ample movement of paddling. Their body floats and their legs serve as paddles. At the same time, they will hold their necks and noses above the water and sometimes pull their bodies upwards.

The rhythm of their breathing changes as they get into the water, mainly because of the pressure of the water applied to their chest and abdomen. It’s characterized by a short inspiration and longer expiration and it might seem like they have a difficulty breathing to the inexperienced spectator.

The more comfortable the horse becomes, his pace transforms into something like a gallop and he might also start snorting with satisfaction.

How Long Can Horses Swim

As we mentioned above, most horses will swim only if they need to, as for them swimming is more like a survival skill than a pleasurable one.

If the horse in cause has previously gotten used with the water, he may go for a total of several minutes of swimming. When swimming in the ocean – yes, there are horses who go swimming in the ocean, and with tourists on their backs – most of them will get tired after five to ten minutes in the waves.

To build their stamina, horses can be trained in a pool, as there are no waves and there’s no tide to tire them when learning, and they will become comfortable with the water faster.

Swimming as Training for Racing

Behind the therapeutic effects swimming has on horses, it’s also a very good training for track racing, preparing them for the ordeals racing has on most horses. It’s as well a good recovery method for horses with sore muscles and a perfect break from the usual race training.