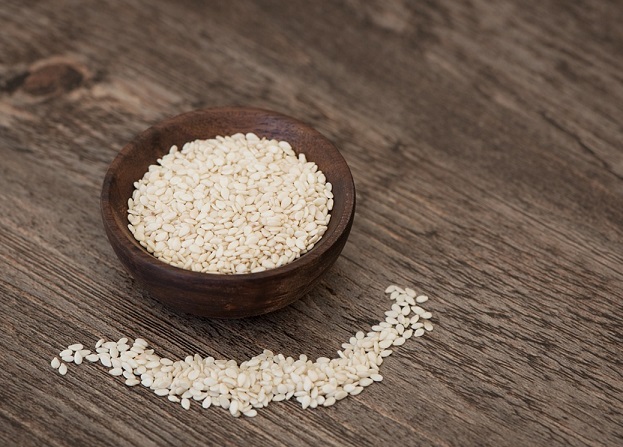 Today’s question: can dogs eat sesame seeds? Are sesame seeds good or bad for dogs? Scroll down for detailed answers.

Sesame seeds, produced by the sesame flower, are a common ingredient used worldwide in a vast array of different foods. Imparting a nutty and rich flavor, sesame seeds are frequently added to different types of bread, such as bagels or hamburger buns. The seeds are also used to bake crackers, cakes, and bread-sticks. Next time you order a sushi roll, you might notice a sprinkling of sesame seeds on the rice. A versatile ingredient, sesame is a healthy nutritional supplement for the human body.  In our modern times, mostly everyone you know is attempting to add a nutritional supplement of some sort to their diet.  Seeds are quick, easy, and affordable while also offering a punch of vitamins to your dietary staples.

While seeds are a crowd pleaser for humans, and a necessity to birds, can other animals eat seeds?  Will seeds affect a dog the same way as a human or bird?  No matter what you may believe, the question remains: can you share these popular seeds with your furry friend? Can dogs eat sesame seeds?

Sesame seeds have been cultivated since prehistoric times, being one of the oldest oil seed crops known to man.  The sesame seed has even to be found with the earliest signs of its cultivation being around 3000 years ago. Many relatives of the sesame plant occur in Africa as well as on the Indian subcontinent. Sesame is widely naturalized throughout tropical regions and it is mainly cultivated for its edible seeds, which grow in pods.

The sesame seed is widely used in Asian, Middle Eastern, and Indian cuisines, sushi being just a singular example. Most notably, tahini in the product of pulverized sesame seeds, which can then be used in various ways, hummus being the most popular example. Sesame seed candy, cookies, and powder are all frequently used ingredients in these parts of the world.

The sesame plant was first brought to the New World during the late 17th Century, and has since become a common ingredient in North American cuisine. In modern times, bagels, breads, and salads all seem to have sesame seeds whether you notice or not.  Some people prefer sesame seed on a bagel, to offer a bit more crunch to offset the softness of the bread.  Order a Big Mac, and you will no doubt find the burger bookended by a sesame seed bun. A Big Mac may be the last place to expect a seed, but the texture is needed to make the full flavor complete!  While adding the sesame seed to a Big Mac might not be the healthiest application of the seed, sesame seeds and oil do indeed have many nutritional benefits.

The health benefits of sesame seeds

Sesame seeds, whether roasted or dried, are extremely rich in calories and provide a great source of essential nutrients. A fantastic source of copper, sesame seeds are also high in protein, dietary fiber, and fat. Sesame seeds are also particularly rich in manganese, iron, vitamin B1, and zinc.  All of these important vitamins are vital to the human body, as well as to that of animals.  Vitamins are rapidly depreciating from our bodies due to our poor food choices and the over processing production of foods.  Taking vitamins where you can get them is incredibly important, and the sesame seed offers quite a batch of vitamins given the extremely small size.

Outside of the regular vitamins offered by the seed, there are also substances within the seed to take care of one’s heart.  The sesame seed also contains sesamin and sesamolin, fibrous substances that have been shown to prevent high blood pressure, lower cholesterol, and increase vitamin E levels. Additionally, these substances have been found to prevent oxidative damage in the liver. With such fantastic health benefits, one might be wondering if their dog could benefit just the same.

If the sesame seed and its derivative products are indeed great additions to a healthy diet, then could it also benefit the health of your dog?  One may assume a small seed is harmless-the seed will not cause choking or blockage.   These side effects are the most common dangers of human food in dogs, but if a seed is small, yet nutritious, only good can come from the act…right?

It is believed that sesame seeds themselves are not toxic to dogs or to their diets. However, despite their fantastic nutritional value for humans, sesame seeds do not really offer anything beneficial that the dog is not already getting in its dog food. Dog food is specially formulated to include all of the nutrition needed for your specific breed of dog.   While human food needs to be supplemented, the food of dogs does not.  Dogs do not have the nutritional needs as much as humans do, especially since a dog is generally carnivorous and not in need of the additional fruit, veggies, or seeds.

Due to the carnivorous digestive system of the canine, sesame seeds are not digested efficiently enough to provide any substantial nutritional benefit. If you feed your dog sesame seeds, do not be alarmed if they come out completely undigested within 24 to 48 hours.  A seed so small and relatively unneeded may be processed through the system of a dog without really being ‘registered’.  The seed is deemed of no use and therefore turned into a waste product rather than a nutritional benefit.

Even though a sesame seed may not be deemed useful by the inner workings of a dog, you may still find the urge to offer the seed to your dog.  Many people, however, still routinely use sesame seeds in their dogs’ diets. Juliette de Bairacli Levy, English herbalist and author noted for her pioneering work in holistic veterinary medicine, wrote in her book The Complete Handbook for the Dog and Cat that she routinely included the seeds and a regular part of her dog’s diet. Crushing the seeds to make tahini, lightly roasting the seeds, or even making a sesame “energy bar,” she found that her dog enjoyed the snacks more so than regular dog treats.  The dog may enjoy the treat, and the treat may be deemed healthier than the alternative bone or cookie, but overall, the seed is unnecessary and unlikely to add any benefits to the dog’s diet.

As many dogs enjoy the flavor of sesame seeds, especially when ground into a paste, sesame seed can be used to induce hunger in dogs that may have low appetites. Those who may be sick, or having trouble eating, may find the sesame seed to aid in the diet of their dog by consumption.  Additionally, sesame seeds can provide digestive support to dogs as they are high in dietary and digestive fiber. Providing a sort of “lubrication” for the intestine, sesame seeds function with digestion, dryness, and sometimes constipation.

Some people even add 1-2 tablespoons of tahini into their dog food.

Adding tahini into the dog’s food can add texture and taste to your dog’s food and possibly liven up his or her day a little bit.  The added benefit of digestive help will also boost your doggies’ immune system and help remove toxins from their bodies.  Despite the fact the seed may come out whole, there is a chance a certain amount of nutritional and health benefit can derive from it-if digested.  Whether you choose to add the sesame seed to the diet of your dog is a personal decision dependent on your particular breed of dog.

No consensus to be found

While many argue for the addition of sesame seeds to a dog’s diet, there are also those who advise against it. Sesame seeds are high in fat and oil, both things that dogs have trouble ingesting efficiently. This could potentially lead to a condition called pancreatitis that causes vomiting, diarrhea, lack of appetite, and stomach pain.  Healthy oils are advised for humans as well as for animals on occasion. However, the oil that is good for digestion in dogs may over react and cause stomach troubles rather than stomach aid.

While a small amount of sesame seeds would not likely cause such an issue, it is still a possibility. Additionally, the seeds could potentially be inhaled, causing choking, coughing, and potentially pneumonia if completely inhaled. These things aside, sesame seeds are not going to affect the internal organs of your dog significantly.  The best advice is to start slowly and introduce sesame seed into the diet a small serving at a time.  If you seem to view your dog enjoying the seed and without complications, you may slowly add more servings.  If you have an issue, you need to refer to a veterinarian as soon as possible and be on the lookout for any serious symptoms.

Adding additional seeds and vitamins to the diet of humans and animals is a modern trend and seemingly very popular ideal.  Whether the seed is needed or deemed beneficial is not the point per se, but whether the sesame seed should be offered and enjoyed.  So many people argue for the sesame seed inclusion into the daily dog diet, and others do not. If you want to try to add sesame seed to your dog’s meals, do so in small amounts, gauging whether your dog enjoys it and whether it affects your dog’s health. Every dog has its differences in taste, allergies, and digestive system, so add sesame seeds to its food in moderation.  Take advice in stride and feed your dog what you prefer and you find to be beneficial, despite what others may say.