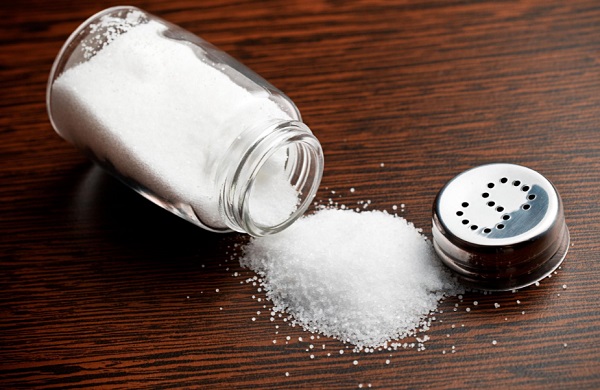 Salt, one of the five basic taste sensations, is essential to the health of humans and animals alike. It improves the flavor of bland foods, and adds dimension to foods that would otherwise not taste so good. Depending on one’s own personal taste, salty foods can be either delicious or inedible. Regardless, it has to be said that salt is part of literally everyone’s diet, whether intentional or not. Salt, along with its best buddy pepper, can be found on most dinner tables around the world. So, if you use salt to improve the flavor of your foods, you might wonder, does it do the same for dogs? Can dogs eat salt? 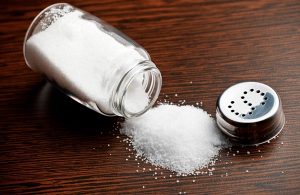 Salt as currency and lifeblood

Salt is used in countless cuisines around the world. It is also an ingredient in many manufactured food products. Table salt, the type of salt generally used in food, is a refined version that contains about 97 to 99 percent sodium chloride. Some table salts contain certain additives, such as iodine, to address various health concerns, mainly in developing countries.

Sodium serves an essential purpose in both human and animal bodies. Helping muscles to function correctly and regulating fluid balance in the body, the majority of sodium in an average Western diet comes from salt.

Salt is not recommended for dogs. So while salt is essential in the human diet, over consumption can cause health complications. The same goes for dogs! Dogs need a bit of salt in their diet the same way humans do. Sodium helps with growth and immune system functionality, but only in small amounts. This need is usually met the inclusion of sodium in most dog foods. The Association of American Feed Control says that dry dog food should contain 0.3% of sodium as a minimum.

Some food contains over 0.3% of sodium in total, although this is not necessarily anything to worry about unless your dogs had been specifically placed on a diet with low levels of salt. Correct levels of sodium aid in the daily functioning of the body, but a little more salt won’t necessarily do any significant bodily harm to your dog. Keep in mind that feeding your dog human food that moderation is always the key.

Water will help if your dog gets into salty food

Excessive consumption of salt can, however, cause serious health complications for your dog. While dogs tend to find a way to get into human foods, such as potato chips, pretzels, or other salty foods, these levels of salt won’t do any serious damage. Just make sure there is some water around to prevent dehydration.

Should your pooch have health issues regarding kidney, heart, or liver problems, it is generally a good idea to have Toto on a low-salt diet, which can lower your furry friend’s blood pressure. It takes a lot of salt for a dog to suffer sodium ion poisoning, but it can certainly happen.

Signs of sodium poisoning include diarrhea, vomiting, excessive thirst and urination, seizures, and even death if left untreated. If any of these signs are occurring in your dog, seek immediate veterinary help. Various treatments are used in cases of sodium poisoning, such as administration of IV fluids, treatment for dehydration and brain swelling, the monitoring of electrolytes, and supportive care for the dog.

Salt is a genuine danger beyond moderation

If you live near the beach, keep in mind that salt water can adversely affect you dog. Many dogs get excited by the seaside and run around incessantly, which can cause your dog to heat up and naturally become thirsty. Try to prevent your dog from drinking sea water to quench its thirst, as, just like human, drinking salt water causes increased risk of dehydration and other related sicknesses. Dogs can develop something called “beach diarrhea” which is a direct result of having ingested too much sea water salt. So be sure to take fresh water to the beach to prevent any sort of dehydration or diarrhea.

While sodium is indeed essential for maintaining healthy body functions in dogs, excessive consumption of salt can lead to several types of health complications. Do not regularly feed your dog salty snacks, keep table salt and other salts out of reach, and always have fresh water on hand in case your dog does in fact get into some salty food. As always, outside of his or her regular food and feeding times, give your dog human foods and snack in moderation. While a salty dog might be the perfect way to quench that summer thirst, salt will definitely not quench your dog’s!