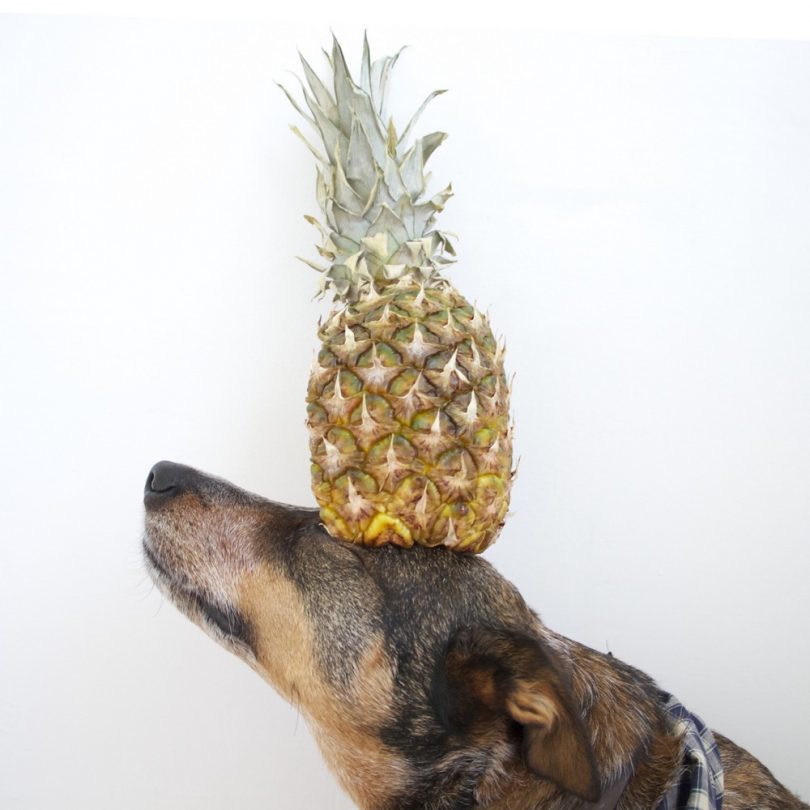 Pineapple is a tropical fruit that is an excellent source of manganese and vitamin C but due to the high acidity you might ask yourself if it’s safe for your pet. The purpose of this article is to answer a simple question: can dogs eat pineapple? And if so what are its benefits.

To put this problem shortly dogs can safely eat pineapple but should do so with moderation. The fruits have vitamins but also contain a lot of sugar which is harmful in large quantities, so think of this as a treat that you give from time to time, instead of something that is essential in the diet.

Dog’s Digestion and How Pineapple Helps

The diet of a dog should be mostly based on proteins but these can be difficult to digest sometimes and the bromelain enzyme contained in pineapples can help with this process. When the digestion works better this permits the body to absorb more important nutrients from food and thus the overall health is improved.

Pineapples contain minerals, vitamins, fructose and fiber so the immunity of the body is increased after eating some and the B vitamin thiamin will give extra energy to the dog. Manganese will strengthen the bones of the dog and there is plenty of it in a pineapple.

Apparently many dog owners noticed that if they feed pineapple to their pet he will give up eating excrements, a behavior that is quite frequent as we have seen in the previous article.

One theory is that the pineapple changes the taste of the feces and the dog is more reluctant to eat it so coprophagia might have a cure with this fruit. This isn’t the only food that has this effect; you can also try foods that contain sulfur such as Brussels sprouts or Cabbage.

The improvement of the digestive system through pineapple might mean that the nutrients from the food are completely absorbed and then there isn’t any need to eat the feces, a theory that seems quite plausible.

The enzyme bromelain is a way to fight cancer according to some research since it lessens the swelling of the joints and was shown to shrink tumors so this is quite amazing. To top this fact, there are also some studies which show that eating pineapple can alleviate the pain of chemotherapy.

The renal system of dogs that have kidney or bladder stones requires a specific diet and it includes pineapple since this fruit doesn’t burden the organs further.

If your dog has pancreatitis the pineapple can help with that too since the digestive enzymes will help reduce the amount of fat in the food.

Injuries might lead to swellings and then even to things like arthritis but many foods have an anti-inflammatory effect so they will aid to prevent this problem and pineapple is one of them.

Ok, after such a long list of benefits you are probably already thinking of the first place where to get some and start introducing it in your pet’s diet, but there are some disadvantages as well and among the most important ones is the large concentration of sugar in a pineapple.

A single cup of pineapple has around 16 grams of sugar and this will decrease the levels of calcium in the body as well as lead to diarrhea if you give your pet too much. Think of this fruit as a treat or medicine instead of as a full meal and only give some from time to time.

Never give your dog more than two or three pieces of pineapple in a single day and if your dog hasn’t had any before then start with some small pieces to see how they react.

The outer skin isn’t eaten by humans and dogs shouldn’t eat it either, so make sure you remove it. Since those who grow pineapples will spray them with various pest repellents these could be ingested by your pet and they can lead to a lot of harm, so remove all the skin as if you would eat the piece yourself.

The middle part is where the bromelain enzyme is in the largest quantity and thus it’s the best. The enzyme is only present in the fresh fruits, altered ones might lead to serious problems and if you have canned pineapple that one won’t have any bromelain because the process through which they are made destroys it.

Asking yourself if a fruit is good or not for your pet is a really important process because not everything that we like is also beneficial for our pet and fruits like grapes, raisins or peaches are actually very dangerous to dogs leading to fits of vomiting and other symptoms that you don’t want.