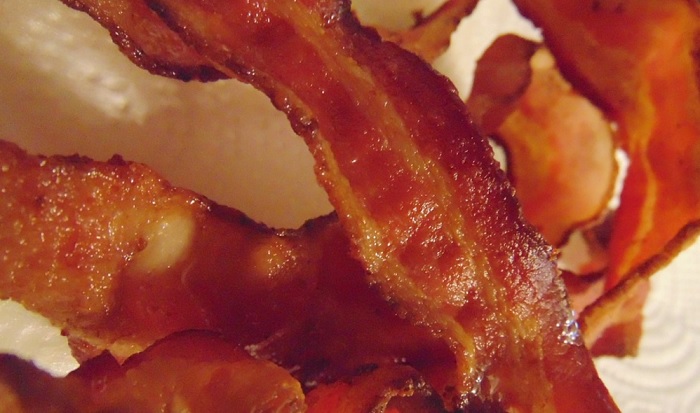 Few foods are as evocative as bacon. Form the smell in the morning wafting around the house to a BLT at lunchtime and why not go all out and have bacon on your cheeseburger for dinner. Even if you are a little healthier, you may be tempted to throw a few bacon bits on your salad so if your cat is looking at you with those big round eyes, head slightly tilted to the side, you may not ‘want’ to give away some of your breakfast but can cats eat bacon?

Coming from the belly of the pig, if you are in North America or the side and back of the pig for the rest of the world, and then cured usually with salt – bacon is one of the most popular meats.  Bacon is a relatively low cost meat, easy to make, and is versatile. Bacon can be made in the microwave, or on the stovetop, making this meat one that is able to be made by even the most resistant cook.   Bacon can be eaten whole as a strip, or crumbled as a topping.  Many people put bacon on sandwiches or use the meat strips as a side during breakfast.  However you choose to enjoy bacon, one of the best components of this meat is the smell.

Indeed there is something of an Internet fascination with bacon leading to such products as bacon infused whiskies and Vodkas.  Bacon scented candles, sprays, and perfumes are also on the market, hoping to capitalize on the bacon loving industry. Dogs are known to love bacon as well as humans, and there are even bacon scented and flavored treats to offer dogs as a reward.  There is even beginning to be a show of bacon flavored treats for cats.  While special made teats for cats are usually deemed ok, what about the real thing?  Is real bacon safe for a cat to enjoy?

Due to the fatty nature of bacon, a lot of people trim some of the fat off.  Instead of throwing it away the fatty part of bacon, should it be given as a tasty little treat to an animal?  Do cats like bacon and fatty meats?

A small piece of cooked bacon given from time to time will most likely not harm your cat. Cats are natural meat eaters and should be drawn to the scent of bacon and the taste of the meat. However, bacon is not recommended as an everyday treat for cats.

Just as humans should not eat bacon every day, neither should your cat.  The bacon itself is a treat, not a necessity in any diet.

Bacon is often also too salty to safely feed to your feline. High salt intake can lead to a lot of health problems in your kitty including high blood pressure, weight gain, dehydration, and heat issues.   The sodium your cat needs for survival is given through cat food, so there is not any need to add sodium to the diet of your cat through bacon.  Bacon is also a high fat food, and pretty greasy.  Even turkey bacon can be full of grease and sodium, making all types of bacon a bit unhealthy for your cat.

Additionally, cats should not eat any raw pork products.  All food should be cooked before offering to your cat to prevent any potential diseases that can derive from poorly cooked meats.  Cooking the bacon before offering to your cat will remove any potentially harmful bacteria, and also make the meat easier to chew and swallow, thereby reducing the risk of choking.

Pork – the good and the bad

You may hear a lot of people advising against giving any type of pork to pets, and due to religious beliefs, there are many millions of people around the world who would never let it pass their own lips. But presuming your cat is not going to pass up some meat due to religious or ethical reasons, is sharing your bacon with your cat deemed ‘ok’?  Yes, you may share your bacon with your cat, but only fully cooked meat, in bite size pieces, and in moderation.

The truth is many pet foods will use pork products as a prominent ingredient, and sometimes the bacon will even be advertised on the label “Chicken with Bacon” or “Pork and Veg”.  Mostly the bacon ingredient will be hidden under such vague descriptions as “meat by products or derivatives”.  This may be written in a vague manner to not dissuade people from buying the product because of pork additives.  Those who choose not to eat pork may not want their cat to eat pork either.  Reading a label stating bacon is within a cat treat may put off a great number of cat owners.  Be sure to read and understand any cat food labels if feeding bacon to your cat poses any sort of issue.

The real danger for pets and humans alike comes in the form of tapeworms and roundworms such as trichinosis. These are serious parasites and if untreated, the initial vomiting and diarrhea will be the least of your worries. Thankfully, basic hygiene and proper cooking will ensure they should not be a problem.

All meat given to any of your pets should be cooked; including trimmings and bones, which should really be avoided being not only a choking hazard but they can also cause blockages while passing through the digestive tract.

The salt content of bacon is the main concern if your cat decides they are as much of a bacon lover as you. Unsalted hams and sausages are a better alternative if you wish to give a little treat from time to time. As cats are of course carnivorous, they will continue to eat this delicacy until you stop giving it to them, so go easy.

The fat content is a worry along with the salt levels with clogged arteries, high blood pressure, weight gain and everything your doctor will warn you about if you tell them that you had a side of bacon with your bacon and eggs in the morning.

Pork, like milk, is not very suitable for a cat’s metabolism, despite the saucer of milk you might see people giving to stray cats in eighties movies. Milk is not as good for cats as we might have been led to believe. Most cats are in fact lactose intolerant. They produce very little or no lactase, which is an enzyme required for digesting the lactose that is found in dairy products.

With more and more cats becoming housebound and the wide range of treats available to them, obesity in cats is becoming a real issue. As cats are descended from hunters and feast or famine was a common situation, many cats will eat until way after they have received sufficient nutrition.

If your cats gets fed first so they don’t bother you while you eat, don’t be surprised that they will continue to take any food from you that you have not eaten yourself.  This can be particularly harmful after they have eaten their kibble, as being already full, they have a tendency to sleep, and the lowering of their metabolism will aid the conversion of fats and sugars directly into body fat.

Sometimes less is more when it comes to feeding your kitties and usually they are not shy about letting you know if they are in need of a little more food.

So, can cats eat bacon? Yes, they can and they sure will. But it is best to save it as a small and occasional treat and maybe best not to make a habit of it. A couple of thin strips of unsalted ham are probably a healthier option for you and your cat.