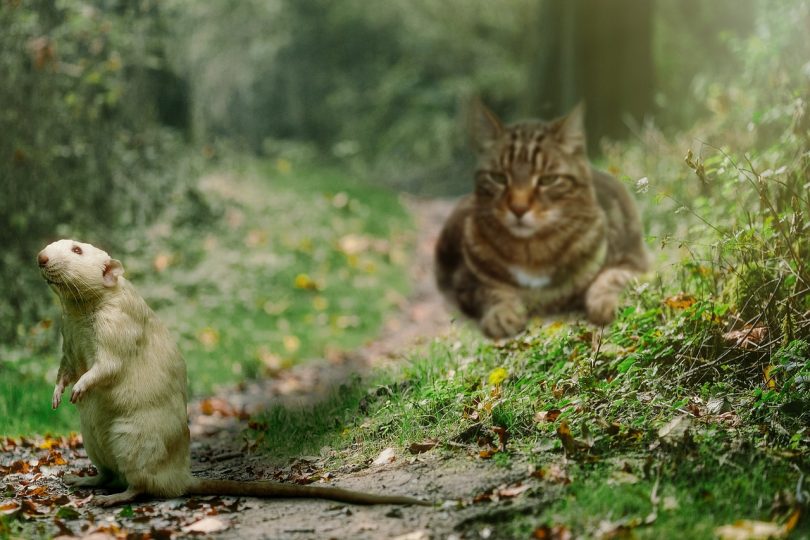 Most people out there are wondering how can cats and rats be friends. The general stereotype that goes around – much emphasized by the classic cartoon Tom & Jerry – is that these two little animals don’t have any bit of sympathy for one another, but the real answer lies somewhere in the gray area in between a clear yes and no.

There are many situations in which a cat and a rat get along just fine but there at least as many in which the rat doesn’t end up too well, or even the other way around, when the cat is chased and scratched and attacked by the rat. Shaking your belief? Sometimes it’s more like a Tom & Jerry kind of situation, with no clear win for either of them.

A Little Bit of History

Back in the days of the ancient Egypt, cats were praised for their ability to chase off and devour any little rodent that might be unfortunate enough to look for food where the Egyptians stored their grains.

After seeing their abilities at work, humans started to like cats more and more for their other attributes as well, so domesticating them was the next natural thing to do. But, as you might expect, that had consequences.

Over time, domestic cats became less and less voracious mice and rat hunters and their natural predator instincts and skills softened to the point that some cats today don’t even bother to hunt rodents at all.

So Can Cats and Rats Be Friends?

The answer to this question is yes. Sometimes. Some cats can sometimes get along with some mice and rats. We said sometimes because this depends a lot on various other factors.

One of these factors is the breed of the cat. Some breeds are known for their well developed mouse hunting skills, while others, well, not that much. This applies to rats and mice as well, but since cats are most of the times the domesticated ones, the ball lands more on their side of the matter.

Most people would agree to the fact that the upbringing and temperament of the cat matter more than the breed. If the cat has all the food he or she needs, hunting will be more for entertainment or training purposes rather than to kill the rat.

There are a lot of cases in which pet cats and rats have been introduced to each other and then started to cohabit without any problem.

Even more, cats and rats can be trained to live together and the results are beyond amazing, as some get on like brothers.

So yes, cats and rats can be friends and get along with each other without problems, but it depends on each particular situation. So before letting them alone by themselves, make sure they can get along, otherwise things might turn out messy.